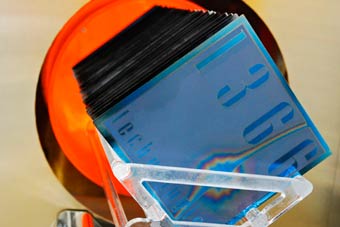 Massachusetts-based silicon wafer maker 1366 Technologies announced on October 15 that the company raised $15 million in funds to support construction of its new, full-scale manufacturing facility where it will produce PV wafers using its Direct Wafer technology.

Construction of the new facility is slated for 2014. When initial construction at the facility is complete, it will create 250 megawatts of PV wafers on an annual basis. Eventually the company plans to ramp production up to 1 gigawatt of PV wafers annually.

In total, 1366 Technologies has raised $62 million, which is helping the company advance to commercial production from earlier demonstration stages. The investor group was led by Tokuyama Corp. and other investors that previously invested in the company’s next generation wafering technology.

“1366 Technologies has the enormous benefit of being a ‘drop-in’ replacement for 60 percent of the photovoltaics market, enabling the majority of panel manufacturers to readily adopt the technology and immediately realize cost and efficiency gains,” said Hidenori Okamoto, Managing Executive Officer of Tokuyama Corporation. “As a strategic partner, we recognized the value in pooling our collective resources to accelerate the adoption of Direct Wafer. As an investor, we’re strengthening that partnership and reinforcing our commitment to advancing the technology.”

The new investment follows the successful launch of production at the company's Bedford, Mass. demonstration facility. 1366 Technologies' process offers advantages over traditional silicon wafering processes, which require casting and sawing. Instead, the Direct Wafer technology can transform silicon into wafers in a single step. This process reduces capital expenditures by two thirds and cuts operating costs in half. The machines at the demonstration site are now able to manufacture more than 1,200 wafers per furnace per day, up from the 50 wafers per day that were being produced at 1366 Technology’s pilot furnace.

“The team continues to make progress against our goal of delivering solar at the cost of coal. Our Bedford operation is well funded and cash flow from operations will be positive in 2013. This new round, led by a strong strategic partner, provides scaling capital for our next phase and is a direct result of our ability to consistently advance the technology,” stated Frank van Mierlo, CEO, 1366 Technologies. “We’ve taken a very deliberate route to high-volume production. In the process we’ve built a stable, capital efficient business during the most challenging of times.”

While the ramping in production is already significant, 1366 plans to further increase production at each furnace, eventually reaching production per furnace of 3,500 wafers per day.

The company now has two operational furnaces and is closer to being able to make more exact copies of the furnaces to replicate in future facilities. PV cells constructed from the wafers are already reaching cell efficiency levels of 17.2% in customer trials.

In 2020, wind power generated over 300 terawatt-hours, or 7.29 percent of the total electrical energy in the country, surpassing hydroelectric power as the biggest source of renewable energy in the US. END_OF_DOCUMENT_TOKEN_TO_BE_REPLACED

END_OF_DOCUMENT_TOKEN_TO_BE_REPLACED

Now is indeed the best time to invest in solar panels, especially if you want to double your ROI during the course of its lifespan. END_OF_DOCUMENT_TOKEN_TO_BE_REPLACED
Calculate How Much You Can Save By Going Solar!
Use The Web's Best Solar Calculator!