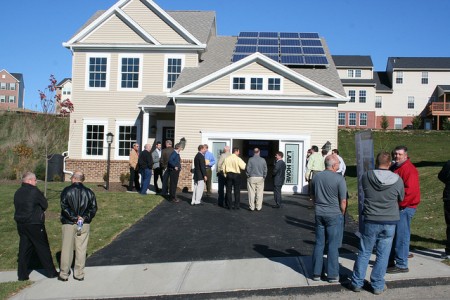 Each day, our industry sits down and whittles the unsightly knots off the tree we call solar energy. We, as a group, spend more time than we should pointing to one of a growing number of reasons why solar energy isn't taking hold in America: that perhaps our government incentives were cut too quickly, that our state's SREC program is broken, that the net metering requirements aren't strong enough. Not that those things wouldn't further bolster our industry, but go out and ask your friends and family about solar energy. The problem with solar energy in America isn't a result of the deficiencies of the incentives (although improved incentives would set this industry on fire), it's with the astounding lack of knowledge about a technology that can transform the lives of everyone in our nation and around the world.

Let me be provocative for a moment. Do you know how much of a return on your investment you would receive if you installed solar on your home or business right now? Do you know enough to even estimate the amount of money you'd save over 25-30 years? Would you guess that solar energy is actually a financial investment with recent returns more solid than stocks and bonds? Do you know that solar energy works in colder climates and on cloudy days? Did you know that nearly any solar installation company will gladly provide you these numbers for free? Probably not. Not many Americans can begin to answer these questions. And who can blame them?

We, as an industry, are still young. We're not the behemoth of major corporations with seemingly unlimited budgets to pay for lobbying and well-placed television commercials. We reach out to a media who has no idea what solar energy really is. We burn with such passion to help our country, and yet many nights feel like we are strangers in our own homes. You can't explain the entirety of the benefits of solar energy in 140 characters. It's both a great and terrible feeling to know what you can give people if only they knew what you could give. It's unrequited love in the form of a solar panel, and we have thousands upon thousands of them waiting to find a good home.

We're not at war with the other energy companies, either. People will still need oil for a very long time (probably longer than our actual supply will last). No energy employee from fossil fuel plants will end up on Skid Row because of solar any time soon. What about utility companies? Utilities are actually required by the state governments to purchase renewable energy, and most of them have employees that are themselves dedicated to the renewable energy sector. They are not our enemies, either. Banks? Banks are in the business of lending--they would love for solar modules to be included in home appraisals. The real estate market? Solar panels on a home sells that home much easier and (say it with me) "not our enemy." We simply have no natural predators, and for that, we're thankful.

What we do face is a nation who just doesn't understand us. We're right here, and there's not been a better time to go solar than today. The panels pay for themselves typically about halfway through their life cycle, and the rest is yours to keep. There is a 30% federal  tax credit for anyone who installs solar on a home or business. Many states have similar tax incentives to add to that. You can get paid to send your excess energy back to the grid. You can also sell solar credits to utility companies.  And if you own a business, there's a good chance you can depreciate the entire installation in one year. Did you know you'll see, on average, a more steady return from "going solar" than you would on stocks and bonds (at least historically speaking)?  It's okay; most people don't know that.

So here we sit as an industry with such a powerful solution for our country--both as a whole and to the people individually. We are, as a nation, being quickly passed up by other countries. Research countries like Germany and what they are doing with solar energy--it's amazing. But we here in the US can't afford to tell everyone what they need to know. We, instead, have to rely on people finding us. We try, don't get me wrong, but we just don't have the financial size and subsequent influence to achieve the success solar energy deserves. The solar industry is young, lacking the means to get the word out in the way that giants of other industries are able to do.

Yet each installation site still drips with the exhilaration and sweat of The Cavern Club in 1961, right after a little-known band named The Beatles just finished playing to a room of about 100 people. Solar energy is the early rock and roll of our generation. We're the rock and roll stars of our time, hell-bent on changing the World. This time, though, it really works. We, as an industry, can see what is ahead. We'll be here waiting. And when you say "Oh man, I wish I knew about this sooner," we won't judge. We'll love and support you just the same. It was Marty McFly in Back to the Future who said: "I guess you guys aren't ready for that yet. But your kids are gonna love it." See you soon, America.

Utility-scale solar power generation is now substantially more efficient in terms of the amount of land it uses for electricity generation than a decade ago. END_OF_DOCUMENT_TOKEN_TO_BE_REPLACED

END_OF_DOCUMENT_TOKEN_TO_BE_REPLACED

END_OF_DOCUMENT_TOKEN_TO_BE_REPLACED
Calculate How Much You Can Save By Going Solar!
Use The Web's Best Solar Calculator!