Solar vs. Wind: What's best for your location? 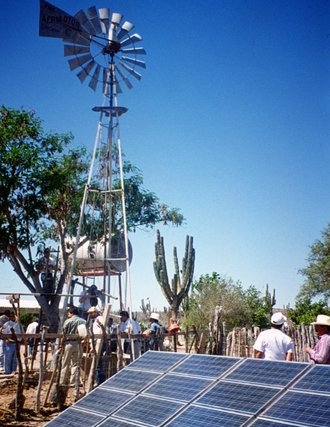 The first thing you need to do is take stock of what resources you have. Throughout most of the United States there is enough sunlight to make a photovoltaic system (PV) a viable option for your location. While residential wind turbines are installed in almost every state, the American Wind Energy Association (AWEA) recommended an average wind speed of four meters per second (about nine miles per hour) to make a wind turbine worthwhile.

As shown in NREL’s Solar Maps, the southwestern parts of the United States get the most sunlight annually, enough to provide more than 6.8 kilowatts hours per square meter (kWh/m2) on the average day. Even Maine receives an average of 4.0 kWh/m2 a day, enough for a PV installation. But a PV system in Maine would need to be larger than a PV system in Arizona to provide enough power for your home or building. And during the winter months in Maine, such a system would need significant battery storage, a backup generator, or need to be tied to the grid.

To determine what size a PV system you would need to offset or completely eliminate your need for grid-supplied power, you can use a solar estimator tool, like NREL’s In My Backyard Estimator or Solar Estimator’s tool. While these will help you get a ballpark estimate of whether or not to consider solar power for your location, a solar professional can help you understand what your solar resources are, how much a PV system will cost, how long it will last, and how much power it will produce at your location.

The majority of suitable locations for wind in the United States are in the Great Plains and along the eastern and western coasts. EERE’s Wind Powering America page can help you determine if your location is suitable for wind power.

To get the most out of a solar installation, you need to have a site that gets a lot of sun from the south, according to the Department of Energy’s (DOE’s) Energy Efficiency & Renewable Energy (EERE) program, you can orient PV panels up to 45 degrees east or west of south with little effect to their ability to produce electricity. However, they need to be tilted appropriately (at least 5 degrees, it differs based on your location) to get the most out of the sun.

A wind turbine requires a significant amount of land. Both EERE and AWEA recommend at least one acre of land for a wind turbine. Also, a turbine needs to be at least 35 feet high, or a good bit taller than any trees or buildings near it. Otherwise it won’t get the full power of the wind. And the higher you go, the windier it gets.

Another important question is, does your power system produce power when you need it most? Wind is most plentiful at night, when power consumption is down. Photovoltaics, on the other hand, produce power during the day, when more electricity is consumed and needed.

Since PV panels come in many forms—some can blend in with tar shingles and even spanish roof tiles—there are a lot of options to meet your needs. And if you’re in a persnickety neighborhood with a homeowners association, they’re more likely to protest a 40-foot tower in the middle of the neighborhood than solar panels on your roof that they likely can’t even see. You can also add more power to a PV system by adding panels with more ease than upgrading a wind turbine, which at the very least would require taking down its tower and changing out the turbine’s gearing and generator.

While both are good choices for powering your home or building, PV offers more flexibility than wind does to meet your needs. Wind may be more suitable if you live in a rural area with good wind potential, but the ability to install solar panels on a roof or in a field means you can put them just about anywhere (as long as they get good southern exposure).

Approval is expected soon on Gemini, a huge 7,000+ acre solar farm served by Warren Buffet’s NV Energy, thus making it the largest solar farm in all of America. END_OF_DOCUMENT_TOKEN_TO_BE_REPLACED

END_OF_DOCUMENT_TOKEN_TO_BE_REPLACED

END_OF_DOCUMENT_TOKEN_TO_BE_REPLACED
Calculate How Much You Can Save By Going Solar!
Use The Web's Best Solar Calculator!