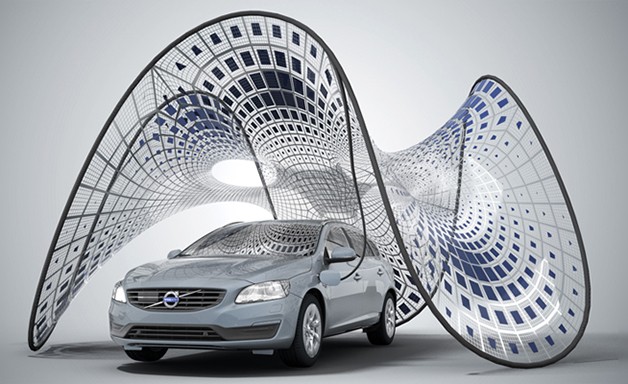 Volvo has made headlines this week with the unfurling of its fancy portable solar electric vehicle charging station for the world’s first plug-in hybrid diesel car, the V60.

The pavilion is made with a carbon fiber frame and mesh topped with thin-film solar panels, according to a story in Wired Magazine. It folds up to the size of a typical camping tent, making it incredibly portable. Once unfolded from the trunk, the aesthetically remarkable solar charging station will take up to three parking spaces and require roughly 12 hours to fully charge the V60’s battery.

Part of the reason for the long charging time is that the locations of the solar panels on the pavilion aren’t ideal. The curved shape of it means solar panels will not always be placed for optimal electricity generation. And the portable nature of the pavilion means panels can’t always face the right direction.

But the stunning portable solar charging station isn’t really meant for consumers anyway, according to Wired.

“There are no current plans to make the structures available to the consumer market,” Alvin Huang, designer and Synthesis principal, told Wired. “But we are in discussion with Volvo about the potential for further development.”

The portable charging station is designed to be eye-catching and to inspire curiosity during Volvo’s Pure Europe Tour later this year when the company’s marketing team will show off the car’s futuristic features all over Europe, starting in Rome in September.

The charging station’s design is even inspired by Volvo’s marketing message.

Huang told Wired that “the pavilion sits on three points, acknowledging the three modes of the car—hybrid, power, and pure electric.”

The pavilion has attracted a lot of attention. But it won’t be available to consumers anytime soon. Priced at $79,000, the fancy portable car charging station is more expensive than the car it’s designed to charge. The Volvo V60, which most say was the runner up to the Tesla Model S in 2013, rings in at about $74,000, though it’s not yet available in North America.

The car is sold out in Europe and industry bloggers tend to agree that the Swedish auto manufacturer is reluctant to launch its revolutionary electric vehicle hybrid in the US because the diesel market here is comparatively small. But speculation abounds that the plug-in and a future consumer-friendly version of the charging station will soon make it to the American market.

After decades of research, the solar industry has finally started to develope the underlying technology behind “transparent” solar panels. END_OF_DOCUMENT_TOKEN_TO_BE_REPLACED

Sustainable energy sources are rapidly soaring in popularity in different parts of the world. The world's dependence on renewable power sources will significantly increase in the foreseeable future. END_OF_DOCUMENT_TOKEN_TO_BE_REPLACED

Being able to charge your EV with a solar panel roof while you are driving is no longer a fancy dream. END_OF_DOCUMENT_TOKEN_TO_BE_REPLACED
Calculate How Much You Can Save By Going Solar!
Use The Web's Best Solar Calculator!