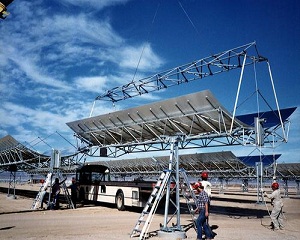 Late into the wee hours of Dec.16, the U.S. House of Representatives passed a bill extending the Bush era tax cuts and extending the 1603 Treasury Grant Program, which has provided grants that support the development of large solar and renewable energy projects. The program has been vital to the industry and to creating new jobs in an economy still struggling.

The House passed the measure by a vote of 277 to 148. Among those voting against it were 112 Democrats and 36 Republicans. The bill is being sent to the White House, and President Barack Obama is expected to sign it into law today (Dec. 17) at 3 p.m.

“After a year's worth of effort, we are now close to getting the 1603 Treasury Grant Program extended. I’d particularly like to thank Representatives Holt, Blumenauer and Thompson for providing leadership and vision in support of the renewable energy industry and the 1603 program,” he said.

SEIA spokesperson Monique Hanis said prior to extending the deadline, projects had to break ground by Dec. 31 2010 to be eligible. They now they have until the end of 2011, which can keep the momentum that's developed behind major utility-scale solar projects up.

"It gives solar a little more flexibility in financing their utility-scale projects, and it helps with the continued financing of solar projects," Hanis said.

The Treasury grants allow developers of large renewable energy projects to receive grants upon completion rather than waiting for a tax credit already in effect. It helps them achieve their return on investment quicker and making it more attractive from an investment standpoint and allows them to free up funds for future developments.

"Even though they don't get the tax credit until the project is finished, it helps them tremendously," she said.

“The extension would undoubtedly increase private capital flows to large-scale renewable energy projects in the United States next year,” said Cindy Eck, a program manager at the American Council of Renewable Energy. “The market has still not recovered sufficiently from the 2008 recession in order to thrive without government incentives such as the cash grant program.”

She called for continued federal support over the next several years and possibly beyond to keep momentum going in the renewables industry.

“The cash grant is also a crucial mechanism for keeping us competitive on a global level, and for US economic development,” Eck said.

SEIA has fought hard to extend the grant program.

“This program has successfully created thousands of jobs and opportunity in all 50 states for construction workers, electricians, plumbers, contractors that have struggled in this harsh economic climate,” said Resch. “An extension will help the solar industry remain one of the fastest growing industries in America and create thousands of new careers.”

The grant has been instrumental, so far, in supporting the U.S. renewable energy industry.

“[The grant program] has helped move forward more than 1,100 solar projects in 42 states and supported $18 billion in investment,” read the SEIA statement, which added that the grant program already provided employment for more than 93,000 Americans.

EuPD’s report also concluded that extending the grant would save the U.S. government money.

It said the net savings to the government through 2016 is expected to be $400,000 million if the program is extended.

END_OF_DOCUMENT_TOKEN_TO_BE_REPLACED

With the launch of SolarAPP+, it is expected that solar energy suppliers will be more amenable to providing services in remote areas, as it will make it easier to conduct code inspections and ensure compliance to get their requests approved faster. END_OF_DOCUMENT_TOKEN_TO_BE_REPLACED
Calculate How Much You Can Save By Going Solar!
Use The Web's Best Solar Calculator!