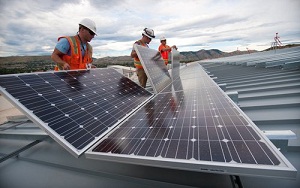 That large number is according to Environment America, an advocacy organization. The nonprofit worked with other nonprofits and the solar, wind and renewables industries last year to get Congress to extend the 1603 Treasury Grant Program. Environment America said its estimates show that the grant program alone has created 59,000 U.S. jobs.

The announcement was made before the U.S. Bureau of Labor Statistics released its monthly employment update, Environment America said.

“The jobs we were talking about were supported by grants last year,” said Environment America Clean Energy Advocate Sean Garren. The grants cover only a small portion of the overall costs of the projects. But they are instrumental in gaining other financing for big renewable-energy projects.

The 1603 grant program was set to expire last year, but was extended when Congress voted to extend the Bush-era tax cuts. It has been an important tool for developers of large-scale renewable energy projects because it allows them to receive incentives for developing large solar or wind projects much faster than they otherwise would.

Since the program only provides part of the money for these projects, it actually creates even more jobs, according to Garren.

“This program has a huge multiplying effect when it comes to jobs. At most, these grants can [supply] up to 30 percent of the project. You’re still getting a huge investment from private companies to get these jobs going. That improves not just job creation but also tax income for the state and local government,” he said. It also helps stimulate the local economies.

Jobs created by the 1603 program are only a portion of the total number of clean energy jobs in the U.S.

Combined solar and wind alone employ close to 200,000 people in the country. And both industries are continuing to grow.

By the end of August 2010, 93,502 people were employed by the solar industry in the U.S., according to a report by The Solar Foundation and Cornell University. And by 2009, the wind industry supported roughly 85,000 jobs, according to the Bureau of Labor Statistics. Both industries are poised to continue growing as well. For instance, The Solar Foundation’s report projected the solar industry would add roughly 24,000 more jobs by August 2011.

Still, Congress could impact the industry’s growth by gutting the program.

“The way the House leadership is attacking health care, the environment and clean energy [it could attack this program],” Garren said. “We haven’t seen an attack yet, but we know it’s the type of thing they’re trying to get rid of.”

Utility-scale solar power generation is now substantially more efficient in terms of the amount of land it uses for electricity generation than a decade ago. END_OF_DOCUMENT_TOKEN_TO_BE_REPLACED

END_OF_DOCUMENT_TOKEN_TO_BE_REPLACED

END_OF_DOCUMENT_TOKEN_TO_BE_REPLACED
Calculate How Much You Can Save By Going Solar!
Use The Web's Best Solar Calculator!