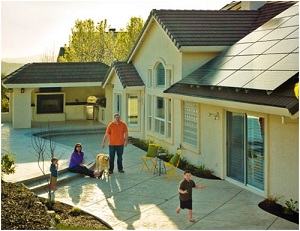 That financing commitment is the largest tax equity commitment to date to any renewable energy company like SunRun, according to SunRun spokeswoman Susan Wise.

SunRun buys solar panels, installs them on residential roofs and makes all of the initial financial investment in complete solar home systems that homeowners then lease at a fixed rate for 20 years.

“We call ourselves a solar power service provider,” Wise said. “We don’t just lease the panels. We provide a service. The financing is the ante to our business, but we’re really passionate about customer service.”

The solar leasing model is growing in popularity and saves homeowners the major upfront investment of $30,000 or more that going solar can require.

While the model works, and SunRun is able to take advantage of all the solar tax incentives, it’s still a model heavy on the upfront investment.

According to SunRun’s press release, it’s the only major company doing what it’s doing that hasn’t ever run out of financing.

“That’s quite an achievement,” Wise said. “And it’s because we have some great leadership that makes sure we have the money before we ever sign with a customer.”

The U.S. Bancorp commitment is supported by the 1603 Treasury Grant Program, which allows renewable energy projects to take a cash grant up to the value of the tax credit the project would have earned.

The 1603 program helped to stimulate more than $9 billion in new renewable energy projects in 2009, according to the SunRun press release, and was just extended through the 2011 fiscal year.

She said the U.S. Bancorp investment in SunRun is a testament to the company’s viability.

"This transaction affirms U.S. Bancorp's confidence that SunRun is a strong leader in a stable, fast-growing market," SunRun CEO and Co-founder Edward Fenster was quoted in the press release. "U.S. Bancorp has been our trusted partner for years and is instrumental in SunRun's continued success as the largest provider of clean, affordable solar energy for American families."

The $200 million tax equity commitment doesn’t just mean SunRun is stable, it means the company can now grow significantly. It’s already a leader in the solar leasing industry. Wise said one in eight people who committed to solar leases in 2010 did it through SunRun.

“This will really promote new growth,” Wise said of the tax equity commitment. “This is where affordable solar is.”

Utility-scale solar power generation is now substantially more efficient in terms of the amount of land it uses for electricity generation than a decade ago. END_OF_DOCUMENT_TOKEN_TO_BE_REPLACED

END_OF_DOCUMENT_TOKEN_TO_BE_REPLACED

END_OF_DOCUMENT_TOKEN_TO_BE_REPLACED
Calculate How Much You Can Save By Going Solar!
Use The Web's Best Solar Calculator!