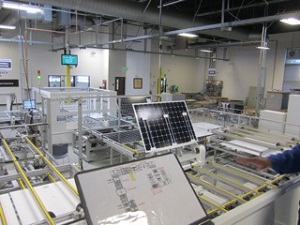 Watching a photovoltaic panel being made at SunPower Corp.’s (NASDAQ: SPWRA, SPWRB) joint production facility with Flextronics Corp. (Nasdaq: FLEX) in Milpitas, Calif., production facility is little like watching the opening sequence of ‘70s sitcom Laverne and Shirley, which follows a “Shotz Beer” bottle going through the automated production line.

But you can see how important a roll automation figures in the sequence of events that produces the world’s most efficient, commercially available photovoltaics.

The automation is somewhat similar in some ways to the process Clean Energy Authority saw earlier this year when we had a chance to tour Abound Solar’s manufacturing facility in Longmont, Colo.

But unlike Abound Solar, which uses thin-film semiconductors and deposits them directly on the glass sheet in-house, SunPower’s silicon photovoltaic cells are produced elsewhere and then assembled in-house. But both companies are able to take raw materials and assemble completed modules in under three hours.

The process starts with glass sheets being loaded by a robot before being cleaned to remove any dust or other particles. After that process is complete, SunPower’s Maxeon silicon cells are placed on the panels by laser-guided robots.

While the overwhelming majority of the production line is automated—modules are moved through the processes on a series of conveyor belts—humans aren’t completely eliminated from the process. For instance, they solder the strings of solar cells together and provide quality checks throughout the process.

But the high level of automation does speed up the manufacturing process.

“Each and every single process that we have at each station is rated at 120 seconds or less,” said Alvin Mandin, a Flextronics program manager.

A couple of processes do take longer, however.

One of the interesting things about the plant is that it can produce three different sizes of modules.

The facility was producing 96-cell modules during the tour, but it can also produce 128-cell and 72-cell modules.

“All we have to do is shrink the conveyors or expand the conveyors based on the type of order we have from SunPower. And it only takes half an hour for the entire line to convert,” he said.

As the modules approach the end of the line, there are two imposing pieces of equipment that prepare them for use. The first is a metal chimney that extends through the roof.

The chimney houses a module efficiency test, according to Mandin.

“The flash test is considered a solar simulator. It simulates natural sunlight in order for us to determine the power rating of the module,” he said.

After being tested, glues and tapes on the modules are allowed to dry in a curing station. Then, the second imposing piece of equipment, a roughly 10-foot tall, one-armed robot, takes over. The robot picks the modules up, and spins and stacks the completed modules neatly on a pallet about 8-feet high.

The pallets are shrink-wrapped and ready to go out for shipments.

“We are targeting to build 640 units a day. We have a time-clock that actually measures the ability of the line. Right now the line has built 414; that means we are 46 ahead of schedule. Our efficiency is one hour ahead of where we should be. In order for us meet the goals of SunPower 640 is our maximum target right now,” Mandin said.

END_OF_DOCUMENT_TOKEN_TO_BE_REPLACED

With the launch of SolarAPP+, it is expected that solar energy suppliers will be more amenable to providing services in remote areas, as it will make it easier to conduct code inspections and ensure compliance to get their requests approved faster. END_OF_DOCUMENT_TOKEN_TO_BE_REPLACED

END_OF_DOCUMENT_TOKEN_TO_BE_REPLACED
Calculate How Much You Can Save By Going Solar!
Use The Web's Best Solar Calculator!