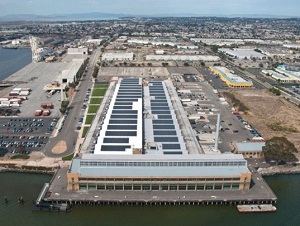 SunPower announced plans this week to expand its solar panel production efforts by opening a fabrication plant in Mexicali, Mexico.

While opening manufacturing plants in Mexico often means companies are aiming to save dollars on labor costs, and while it may also mean that in this case, the new plant in Mexico is a sure sign that solar is catching on in North America.

“It’s a large facility that will allow us to have a large impact on the North American market,” SunPower CEO Tom Werner said in a conference call about second-quarter earnings.

He said he expects North America to be the largest solar market in the world by 2014. While that’s due primarily to growth in the United States and Canada, Werner said Mexicali proved a good location for a new manufacturing facility because SunPower will be able to transport its solar photovoltaic panels over land instead of water.

SunPower worked closely with the Industrial Development Commission of Mexicali in locating its facility, according to a press release about the new plant.

"Mexicali is rapidly becoming an industrial hub for high tech companies, offering an educated workforce and a growing manufacturing area," Mexicali Mayor Francisco Perez Tejada Padilla said in a statement. "We welcome SunPower to our city and are pleased that they have chosen Mexicali to establish its solar panel manufacturing facility."

The company plans to use the 320,000-square foot facility to produce its high-efficiency E18, E19 and E20 series solar panels for residential, commercial and power plant projects.

"Establishing our own manufacturing facility in Mexicali means we will be positioned to quickly deliver our high-efficiency, high-reliability solar products to a growing North American solar market," Marty Neese, SunPower's chief operating officer, said in a statement. "Over the past year, we have successfully ramped up manufacturing at Fab 3 in Malaysia where we set records for output and yield efficiency.”

Werner said in the earnings call this week that there is a backlog of demand in North America and that the new Mexicali plant will help SunPower meet that demand.

“The Mexicali plant is a good compliment to the facility in the Silicon Valley,” Werner said.

Approval is expected soon on Gemini, a huge 7,000+ acre solar farm served by Warren Buffet’s NV Energy, thus making it the largest solar farm in all of America. END_OF_DOCUMENT_TOKEN_TO_BE_REPLACED

END_OF_DOCUMENT_TOKEN_TO_BE_REPLACED

END_OF_DOCUMENT_TOKEN_TO_BE_REPLACED
Calculate How Much You Can Save By Going Solar!
Use The Web's Best Solar Calculator!