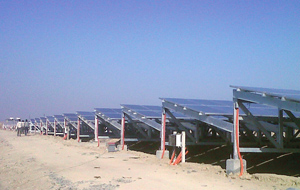 SunEdison recently completed $260.5 million in financing with Rabobank, IFC and the Overseas Private Investment Corporation (OPIC) to build a 100 megawatt Amanecer Solar CAP solar farm in Chile’s Atacama Desert. Construction on the project already is underway and it is slated for completion in the first quarter of 2014.

The project is near the city of Copiapo in Chile’s Atacama Region. According to SunEdison, construction on the project, which is using more than 300,000 SunEdison Silvantis PV modules on its AP90 trackers, began in late August. SunEdison signed an agreement with mining and steel company CAP in January 2013.

The project will come online in phases throughout the rest of 2013 and be complete in early 2014, a spokesperson for the company said.

“Once fully completed, it is expected to be the largest solar photovoltaic plant in Latin America. In its first year of operation, the system is expected to generate 270 GWh per year of clean energy.” The project will provide energy to Chile’s Central Interconnected System (SIC)."

"We are very pleased to partner once more with OPIC and IFC. ‘Amanecer Solar CAP’ is a landmark project that enables the deployment of solar energy in Chile in a meaningful way. Developing sophisticated energy solutions while reducing electricity costs has been a key differentiator of SunEdison's success in Chile," said Pancho Perez, SunEdison’s President for Europe, Middle East, Africa and Latin America.

"IFC's support to Chile's renewable energy sector through this landmark solar project with SunEdison is a continuation of our previous wind and hydropower investments in the country," added Bernard Sheahan, IFC Director for Infrastructure and Natural Resource. "We hope that this project will catalyze the growth of Latin America's solar sector and further the Government of Chile's efforts to better develop the country's remarkable renewable energy resources."

Elizabeth Littlefield, OPIC President and CEO, went on record to say, "As one of OPIC's first renewable energy transactions in Chile, this project will take advantage of the country's solar potential to increase energy access and create local jobs. We look forward to continuing the strong partnership with SunEdison as it supports Chile's effort to diversify its energy sources."

"Photovoltaic solar energy is an ideal source to diversify the current energy mix, reduce energy costs, and contribute to the growing energy demand in a country that has extraordinary conditions for the development of this type of energy. This project is just the first step of SunEdison's long term commitment to the development of the green energy in Chile," Perez concluded.

The project in Chile adds to SunEdison’s portfolio of global projects. The company said that as of June, it had interconnected more than 700 projects representing more than 1 gigawatt of solar power.

Utility-scale solar power generation is now substantially more efficient in terms of the amount of land it uses for electricity generation than a decade ago. END_OF_DOCUMENT_TOKEN_TO_BE_REPLACED

END_OF_DOCUMENT_TOKEN_TO_BE_REPLACED

END_OF_DOCUMENT_TOKEN_TO_BE_REPLACED
Calculate How Much You Can Save By Going Solar!
Use The Web's Best Solar Calculator!