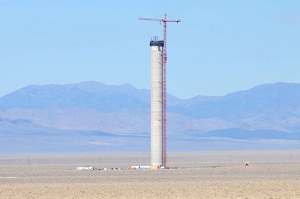 Michael Whalen, the CFO for SolarReserve, marveled at how quickly its Crescent Dunes solar power tower went up after all the financing and planning was finished.

SolarReserve announced on Thursday that the central tower was complete, one large step toward getting it online before the panels and mirrors are installed.

“The tower went up about a foot an hour,” Whalen said. “It’s amazing to see how quickly it progressed.”

It’s especially amazing considering that its one of just a handful of solar power towers in the world using molten salt technology.

The 110-megawtt solar project near Tonopah, Nev., will produce 500,000 megawatt hours of power a year and has a built-in energy storage system that allows it to reliably and consistently deliver power even on cloudy days and dark nights, Whalen said.

SolarReserve signed a 25-year power purchase agreement with NV Power long before the project got to its construction stages.

Financing a rare project like the Crescent Dunes tower was a challenge, Whalen said.

SolarReserve received a $737 million loan guarantee from the US Department of Energy in September that made the project possible.

Companies and projects like his rely on that early stage backing from government financing so they can prove themselves in the market and earn credibility that will make them viable candidates for private financing on their next projects.

“It’s not like we were building our first solar tower,” Whalen said.

The company first demonstrated its solar tower technology with molten salt storage in California in the 1990s with a 10-megawatt project. But this kind of technology at this scale is something new in the world solar industry.

This is some of the most advanced solar thermal technology in the world, Whalen said. It will be the first solar facility with full-integrated energy storage in the country and the largest solar plant of its kind in the world.

When it comes online by the end of 2013 it will produce enough electricity to power 75,000 homes, will payout more than $10 million a year in salaries and operating costs and is expected to generate $47 million in tax revenues, according to a release from SolarReserve.

As of January 1st, 2020 home owners could claim 30% of the installation cost as deductions while filing their taxes, this has changed significantly this year. END_OF_DOCUMENT_TOKEN_TO_BE_REPLACED

Approval is expected soon on Gemini, a huge 7,000+ acre solar farm served by Warren Buffet’s NV Energy, thus making it the largest solar farm in all of America. END_OF_DOCUMENT_TOKEN_TO_BE_REPLACED

END_OF_DOCUMENT_TOKEN_TO_BE_REPLACED
Calculate How Much You Can Save By Going Solar!
Use The Web's Best Solar Calculator!