SolarCity to offer Maryland residents solar with no up-front costs 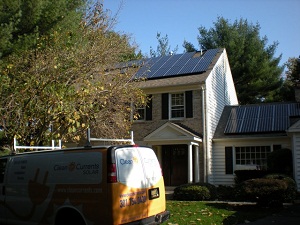 Fast on the heels of its entrance to the Oregon market, SolarCity said it is entering the Maryland market in February. The company will be the first to offer Maryland residents an opportunity to install solar on their homes at no up-front cost.

The entrance is the first time SolarCity will offer its SolarLease on the east coast. The California-based company recently entered the Pacific Northwest when a rules change made its SolarLease economically feasible in Oregon.

“Clean Currents will continue to offer their SREC [i.e., solar renewable energy credits] broker services. We purchased their solar installation division. It’s 12 people based in Silver Spring,” he said. “We retained everyone and likely will be hiring an additional 30 people.”

SolarCity is now focused on integrating Clean Currents Solar into SolarCity. The company plans to start offering its SolarLease February.

“We think the demand will be strong but can’t get a projection on it now,” Bass said.

SolarCity will roll out the lease throughout most of Maryland.

“We’ll be covering the majority of it,” Bass said. The company will offer its services throughout Northern Maryland, including the region known as the panhandle and above Baltimore. “Initially we likely won’t be covering the eastern shore.”

The lease allows homeowners in most of Maryland and in Washington, D.C., to put solar on their homes at no up-front cost. Homeowners lease the panels from the company and pay a set monthly fee for the system.

Under the lease homeowners pay less for the system than they would for the equivalent electricity that they would buy from the grid, lowering the overall amount that the homeowner pays for electricity. The homeowner also retains any credit or reimbursement for excess energy produced by the system.

The company has plans to expand into more states in 2011, Bass said. But, he added, “We only announce specific states when we’re ready to offer service.”

Overall, the company has raised more than $700 million in financing, from institutions including Morgan Stanley and U.S. Bank Corp., Bass said. Attracting additional funding to offer more leases and expand SolarCity’s reach into new markets has not been an issue for the company. “We have over 10,000 customers making us more attractive [to investors],” he said.

As of January 1st, 2020 home owners could claim 30% of the installation cost as deductions while filing their taxes, this has changed significantly this year. END_OF_DOCUMENT_TOKEN_TO_BE_REPLACED

Approval is expected soon on Gemini, a huge 7,000+ acre solar farm served by Warren Buffet’s NV Energy, thus making it the largest solar farm in all of America. END_OF_DOCUMENT_TOKEN_TO_BE_REPLACED

END_OF_DOCUMENT_TOKEN_TO_BE_REPLACED
Calculate How Much You Can Save By Going Solar!
Use The Web's Best Solar Calculator!