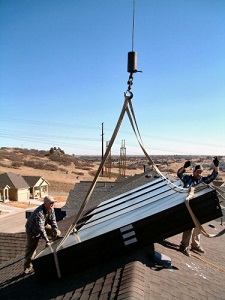 For one, solar thermal technology has traditionally been limited to hot water heating and space heating.

While hot water is used daily, and in significant amounts, the amount of water heated by adding solar thermal technology to a home may be more than the typical residence would ever use. And in a climate where space heat is only necessary less than half the year, the concern is that a solar thermal system may become a “stranded asset” come spring and summer.

“It’s easy for two- panel systems to be a year-round producer,” said Jerry Miriza of United Power and Electric Cooperative. “But if you go farther than that and put up a six-to-eight panel system to do some space heating for you, too, then there isn’t much it can do for you in the summer.”

Advances in technology will undoubtedly be the answer to this particular challenge. Already, Cool Energy, LLC, has developed a low-temperature Stirling engine heat-and-electricity system that transfers the heat generated from solar thermal into electricity. Other advances are sure to come, raising the payback of solar thermal technology.

“With our system, excess heat generated in the summer time, for example, is transferred to electricity through a Solarheat engine, so you don’t have a stranded asset, and you can hedge against both heat and electricity,” said Sam Weaver of Cool Energy, LLC.

The challenges aren’t limited to the technology itself, however.

Tax rebates and incentives are indeed aiding the industry, but as of now are short-term only. A lack of leasing programs, which are becoming more common in the solar PV industry, may be hurting the solar thermal industry as well.

“Financing is another economic barrier. One of the changing forces in solar thermal PV is that those guys understand how to finance a PV system. If solar thermal could figure out a financing method that comes prepackaged and reduces or eliminates upfront costs to the homeowner, that would make a big difference,” said Weaver. “I know a lot of people are buying SolarCity PV systems because they don’t have a big upfront cost and they don’t have to refinance their home to install a system.”

END_OF_DOCUMENT_TOKEN_TO_BE_REPLACED

Researchers at the Northeastern Center for Renewable Energy Technology (NUCRET) are exploring trees as a natural resource to create new sustainable materials. END_OF_DOCUMENT_TOKEN_TO_BE_REPLACED

As of January 1st, 2020 home owners could claim 30% of the installation cost as deductions while filing their taxes, this has changed significantly this year. END_OF_DOCUMENT_TOKEN_TO_BE_REPLACED
Calculate How Much You Can Save By Going Solar!
Use The Web's Best Solar Calculator!