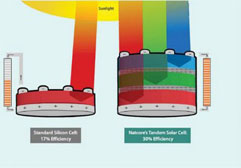 And on March 21, the company announced the sale of its first coating processing station to Chinese solar manufacturer, TLNZ Solar Technology Co. Ltd.

Traditionally, crystalline silicon photovoltaics manufacturers have coated their cells with a process called chemical vapor deposition, which bakes the anti-reflective coating onto solar panels at high temperatures in a vacuum furnace, requiring expensive equipment, hazardous materials, high-energy use and thick layers of silicon that can withstand the heat.

“The discs that we put the coating on don’t have to be as thick. If you run silicon through high temperature ovens it needs to be thick to withstand the heat,” said Natcore’s Marketing Director Dave Rutkin. “The silicon can be two thirds thinner than other silicon going through furnaces.”

But the technology won’t make the panels more efficient than other technologies.

“We’ve had them measured about 15 percent to 17 percent efficient, about the same as solar cells made elsewhere,” Rutkin said.

But the process could lead to significant savings through the production reduction in energy use, equipment and materials.

“We think that with our automation and given the other advantages LPD has, we think it will make [solar] cost-competitive with fossil fuels,” he said.

Natcore also is making the process modular so it can be developed for different markets.

“We’ll sell the machine based on what the solar manufacturers want,” Rutkin said. “In China, they’re happy to have a less expensive machine without a lot of automation. In this country we can automate it as much as the manufacturer wants.”

For instance, the machine can be developed to recycle the materials used, or automated to the extent that the wafers go in one end and come out with coating. But Rutkin said that the process may involve more labor.

TLNZ will likely become the first company to find out how much they can save with the process. Natcore began building its first anti-reflective coating processing station on March 15. The company said it expects to complete the production phase within 10 weeks. After completion, it will be tested, adjusted and shipped to TLNZ.

The solar manufacturer will close the sale after completing a successful test of the equipment.

In 2020, wind power generated over 300 terawatt-hours, or 7.29 percent of the total electrical energy in the country, surpassing hydroelectric power as the biggest source of renewable energy in the US. END_OF_DOCUMENT_TOKEN_TO_BE_REPLACED

END_OF_DOCUMENT_TOKEN_TO_BE_REPLACED

Now is indeed the best time to invest in solar panels, especially if you want to double your ROI during the course of its lifespan. END_OF_DOCUMENT_TOKEN_TO_BE_REPLACED
Calculate How Much You Can Save By Going Solar!
Use The Web's Best Solar Calculator!