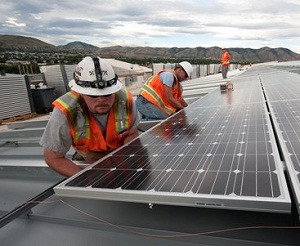 Policy, particularly at the state and even at the company level, has a large impact on solar and other renewables. It’s helped California, Colorado and New Jersey, among other states, increase the presence of renewables and has driven jobs growth.

But policy, either enacted by a legislature or by regulators, can also hinder the development and growth of the solar industry. During Solar Power Colorado, Colorado Solar Energy Industries Association’s (COSEIA) annual conference, a panel of policy experts discussed what legislation and policy, good and bad, is likely in the coming years.

One thing that’s definitely starting to change is how utilities work with distributed generation.

“One thing that’s happening is an increase in utilities wanting to get into the business of selling solar,” said Annie Carmichael, the Vote Solar Initiative’s solar policy director.

She cited Arizona’s APS, a utility which last year started selling solar systems to schools and public buildings. The utility offers a third-party ownership option, allowing the entities to install solar with no upfront costs, like residential solar leases.

“They don't lose revenue or a connection with their customers,” she said.

On the other side of things, utilities may try to push legislation that adds charges to homes and businesses bills for going solar, according to Carmichael.

“The other thing we're seeing, which is definitely coming to Colorado this year, is the proposal of network-use charges and standby charges for net-metered customers,” she said. “San Diego Gas and Electric introduced a standby charge of $10 to $40 for a solar installation.”

Ultimately Vote Solar and others were able to stop the utility from enacting the policy.

But other utilities are likely to push for similar policies and legislation in other states.

“The message [utilities are using] here is that net-metering is an unfair subsidy. That it's a cost shift, where low-income customers are subsidizing wealthy solar customers,” Carmichael said.

The bodies that regulate solar and energy, like Colorado’s Governor’s Energy Office (GEO), are also changing as the industry matures.

“We really are trying to understand where are the market failures and the market barriers that are preventing economic activity from occurring,” said GEO Director TJ Deora. That’s partly because the GEO is switching to a much tighter budget now that federal monies and its other funding streams are drying up.

The office is not working on doling out incentives as much as it is interested in creating an environment for job creation, energy security and lowered long-term consumer costs and providing environmental protection, according to Deora.

“We think there's plenty of opportunity within all those areas where we can keep ourselves busy,” he said. “GEO wants to bring societal Interest and profits together, really to do it through policy and through stakeholders who understand where these alignments might be.”

“REAs are becoming more interested in renewables as the price comes down,” he said. “That's great to hear. I think a lot of people believe we need to raise that standard up.”

Colorado may do more to drive renewable energy growth by designing legislation that designates solar-specific communities.

In 2020, wind power generated over 300 terawatt-hours, or 7.29 percent of the total electrical energy in the country, surpassing hydroelectric power as the biggest source of renewable energy in the US. END_OF_DOCUMENT_TOKEN_TO_BE_REPLACED

END_OF_DOCUMENT_TOKEN_TO_BE_REPLACED

Now is indeed the best time to invest in solar panels, especially if you want to double your ROI during the course of its lifespan. END_OF_DOCUMENT_TOKEN_TO_BE_REPLACED
Calculate How Much You Can Save By Going Solar!
Use The Web's Best Solar Calculator!