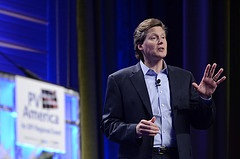 “I am thrilled to announce that the solar energy industry is now the fastest growing industry in America,” said Solar Energy Industries Association (SEIA) CEO Rhone Resch today at the opening general session of PV America Conference 2011 in Philadelphia.

The industry experienced year-over-year growth in 2010 of 67 percent, based on sales of installed solar, said SEIA spokesperson Monique Hanis. The figure is from SEIA and GTM research’s “2010 U.S. Solar Market Insight: Year in Review." “We haven’t found any other industry that grew faster,” she said.

"We are seeing unprecedented geographic diversity as well. I like to call this my Sweet Sixteen map. Last year, 16 states installed more than 10 MW; that's up from 4 states in 2007,” Resch said. "Already, the Mid-Atlantic region is beating California as the largest market in the U.S. for PV installations,” he said.

The U.S. solar industry also is poised for more growth in the coming years. The Mid-Atlantic and Northeastern U.S. will have need for more than 3 gigawatts of new photovoltaics by 2015, Resch said.

"Think about it,” he said. “That's enough solar to power more than half a million homes.”

That’s just one region of the country.

“Right now, there’s a total of 23 gigawatts of solar projects across the U.S.,” Hanis said. Over the next four years, the majority of the growth will occur in the southwest as huge utility-scale projects come online, according to Hanis.

“The message is really about diversification across the U.S.,” Hanis said. She pointed to growth for the various solar technologies, like concentrated solar power, solar thermal and photovoltaics, and also to growth in the installations in the various markets.

Despite the growth, issues still threaten the industry’s vitality, according to Resch.

Financing issues are the chief concern, he said. To address the issue, SEIA is advocating for a multi-year extension of the 1603 program, establishing a Clean Energy Bank to provide long-term low cost financing, making modifications to the tax code encouraging investments in solar, developing a national clean energy standard and allowing the federal government to enter into power-purchase agreements.

Utility-scale solar power generation is now substantially more efficient in terms of the amount of land it uses for electricity generation than a decade ago. END_OF_DOCUMENT_TOKEN_TO_BE_REPLACED

END_OF_DOCUMENT_TOKEN_TO_BE_REPLACED

END_OF_DOCUMENT_TOKEN_TO_BE_REPLACED
Calculate How Much You Can Save By Going Solar!
Use The Web's Best Solar Calculator!