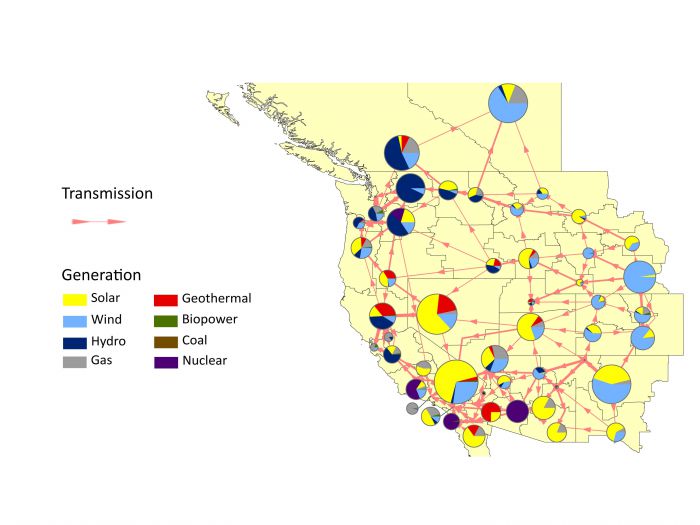 That’s if the SunShot Initiative’s goals to reduce the cost of solar are realized, according to a new University of California, Berkeley. The research used computer modeling to predict what the U.S. West’s energy infrastructure could look like by 2050.

The study was led by study leader Dan Kammen, a professor of Energy in UC Berkeley’s Energy and Resources Group and will appear in the journal Environmental Science and Technology, in a piece that was written by graduate student Ana Mileva, coauthored by James Nelson and Josiah Johnston. In the study the researchers developed a computer model to predict what will happen if the Department of Energy’s SunShot Initiative succeeds, including the effects of potential carbon policies like a carbon cap.

Ultimately they found that if SunShot is successful, photovoltaics would provide more than a third of electric power in the region by 2050. If it reaches those adoption rates it would displace natural gas, nuclear and carbon capture and sequestration technologies and reduce greenhouse gas emissions enough to help minimize the negative impacts of climate change, the researchers said.

“Given strategic long-term planning and research and policy support, the increase in electricity costs can be contained as we reduce emissions,” Kammen said. “Saving the planet may be possible at only a modest cost.”

“Our goal is to study how we can keep costs low and ensure that the grid stays reliable as we transition to an electricity system with lower emissions and higher levels of intermittent renewable generation,” added Mileva.

To help kickstart the utility industry to consider solar more seriously, Kammen said that carbon caps or taxes will be needed. While previous studies have shown that carbon policies would increase the cost of electricity significantly, the UC Berkeley study showed that achieving the SunShot targets could moderate the increased costs and, “Solar power could save consumers 14 percent, or more than $20 billion, annually by 2050 while still achieving carbon goals,” the school said.

“The lower estimated ratepayer cost is also partly attributable to the coordinated investment in new power plants, transmission lines, storage, and demand response in the SWITCH model,” Kammen said. SWITCH is the computer model the team used, it stands for Solar, Wind, Hydro and Conventional generators and Transmission. “Using such a comprehensive strategy could substantially reduce the actual consumer cost of meeting carbon emission targets.”

In 2020, wind power generated over 300 terawatt-hours, or 7.29 percent of the total electrical energy in the country, surpassing hydroelectric power as the biggest source of renewable energy in the US. END_OF_DOCUMENT_TOKEN_TO_BE_REPLACED

END_OF_DOCUMENT_TOKEN_TO_BE_REPLACED

Now is indeed the best time to invest in solar panels, especially if you want to double your ROI during the course of its lifespan. END_OF_DOCUMENT_TOKEN_TO_BE_REPLACED
Calculate How Much You Can Save By Going Solar!
Use The Web's Best Solar Calculator!