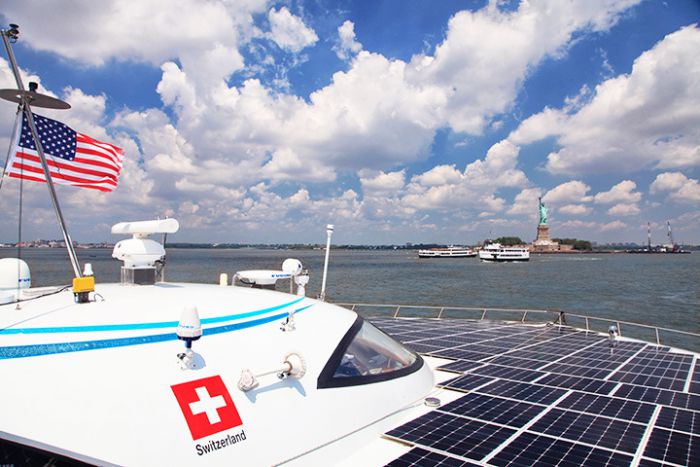 The Turanor PlanetSolar, covered in 5,554 square feet of solar panels, is parked at the North Cove Marina until June 20 so people can view it and learn about the cutting edge vessel.

PlanetSolar already circumnavigated the globe once between September 2010 and May 2012, stopping in 28 countries to showcase its technology. This trip is different. The boat crossed the Atlantic Ocean making few stops before arriving in Miami earlier this month. After New York, PlanetSolar will stop in Boston before beginning its research mission.

Scientists from the University of Geneva will collect uncontaminated samples from the Gulf Stream to study the impacts of global climate change.

“Our objective is to understand the complex interactions between physics, biology, and climate, eventually enabling scientists to refine climate simulation, especially as it relates to energy exchanges between the ocean and the atmosphere,” Geneva professor Martin Beniston said in a statement. “Since the ship is powered by solar energy it does not emit any polluting substances that could distort the data collected on its 8,000 kilometer journey between Miami and Bergen, Norway.”

While PlanetSolar is making far fewer stops and will spend much less time at sea during this second journey, the boat is still getting significant attention in the ports where it does dock. The Swiss government is proud of the attention the boat is receiving globally. It’s one of the PlanetSolar’s sponsors.

“PlanetSolar has become a prominent ambassador for renewable energies. It also embodies Switzerland’s commitment to foster innovation for a more sustainable future, similar to the recent initiatives announced by the City of New York,” said Ambassador François Barras, Consul General of Switzerland in New York. “The ship’s arrival is timely following Mayor Bloomberg’s proposal to protect the city against the effects of climate change.”

The boat is worthy of praise. The vessel weighs in at 90 tons and is powered entirely by the more than 5,500 square feet of solar panels bejeweling its deck. Wings fold out when the boat is at sea to capture more of the sun’s energy. Nine tons of batteries store up to 72 hours of power to move the boat through waters at night and on cloudy days.

The boat’s average speed is about 6 miles per hour, though it can get up to 16 miles per hour. While that’s about on par with the 8 miles per hour colonial ships traveled across the Atlantic in the 1700s, the PlanetSolar stirs a different sense of the pioneering spirit.

END_OF_DOCUMENT_TOKEN_TO_BE_REPLACED

With the launch of SolarAPP+, it is expected that solar energy suppliers will be more amenable to providing services in remote areas, as it will make it easier to conduct code inspections and ensure compliance to get their requests approved faster. END_OF_DOCUMENT_TOKEN_TO_BE_REPLACED
Calculate How Much You Can Save By Going Solar!
Use The Web's Best Solar Calculator!