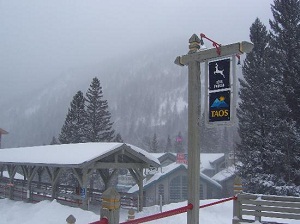 Ski resorts are large consumers of energy, resort administrators said. And one of the challenges to using solar to offset that energy consumption is the business itself.

“Hopefully it’s snowing and there isn’t a whole lot of sun,” said Adriana Bloke, spokesperson for Taos Valley ski area in New Mexico. “When we’re using the most energy is when it’s darkest.”

She said the Taos ski resort is tucked into a valley that gets fewer than four hours of sunlight during winter months when the resort is operating.

Aside from operating during the wrong time of year for sun power, the most expensive part of the resort’s energy operation happens at night.

“Snowmaking is, by far, the biggest draw on energy here,” Blake said.

Resorts typically make snow at night when the air temperature is coldest and efforts will be more successful and snow will be lighter and fluffier.

Even though the resort is grid-tied, feed-in tariffs would not be big enough to make up for the expense of installing a solar system, she said.

Like the other resorts, though, Taos is working to reduce its energy consumption and recently had an energy audit performed to help administrators see where they could realize some energy savings.

Cutting energy use is the key, according to all of the U.S. resorts interviewed.

Once the resorts reduce their carbon footprints, they will consider integrating solar power generation into their energy portfolios.

Aspen is working on growing its solar portfolio. Even if the green power it generates is only a small portion of what it needs, Schendler said, it’s making an important statement and creating an educational opportunity for guests.

Utility-scale solar power generation is now substantially more efficient in terms of the amount of land it uses for electricity generation than a decade ago. END_OF_DOCUMENT_TOKEN_TO_BE_REPLACED

END_OF_DOCUMENT_TOKEN_TO_BE_REPLACED

END_OF_DOCUMENT_TOKEN_TO_BE_REPLACED
Calculate How Much You Can Save By Going Solar!
Use The Web's Best Solar Calculator!