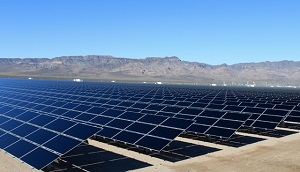 “I think what Copper Mountain shows is that we can rapidly install PV projects very quickly to meet U.S.’s electric needs,” said Sempra spokesperson Scott Crider. “It should be fully commissioned this month. The project is essentially done and delivering energy to PG&E.”

The project can supply enough electricity to power about 14,000 homes and is now going through some final testing, he added.

Crider explained that Sempra owns and operates the project and sells all of the generation from the farm to Pacific Gas & Electric under a power-purchase agreement. The company contracted with First Solar to provide and install the system.

First Solar, a U.S.-based company, also completed the world’s largest PV farm, the 80 MW Enbridge solar farm in Sarnia, Ontario, in late September 2010. Prior to the completion of Copper Mountain Solar, the largest PV plant in the U.S. was the 25 MW DeSoto Next Generation Solar Energy Center in Arcadia, Fla.

Sempra and Enbridge can bathe in the glory of their respective mantles—for the moment. But they will soon relinquish their titles, perhaps to another Sempra project.

“We have a couple of even larger projects. Our California project called Rosamond Solar just received approval,” Crider said.

He said the company will break ground on the 200 MW Rosamond project in California in 2012.

Before it can break ground on that project, though, Sempra will start construction on the 600 MW Mesquite Solar PV project in 2011.

“We’re starting the first 150 MW phase of 600 MWs just west of Phoenix, under a power-purchase agreement with Pacific Gas & Electric,” he said.

But Sempra’s plans for future PV plants may be even larger.

In a press release, Sempra President Jeffrey Martin said, “We have a focused plan aimed at developing more than 1,000 MW of solar projects in California, Arizona and Nevada that will provide solid returns well into the future.”

END_OF_DOCUMENT_TOKEN_TO_BE_REPLACED

With the launch of SolarAPP+, it is expected that solar energy suppliers will be more amenable to providing services in remote areas, as it will make it easier to conduct code inspections and ensure compliance to get their requests approved faster. END_OF_DOCUMENT_TOKEN_TO_BE_REPLACED
Calculate How Much You Can Save By Going Solar!
Use The Web's Best Solar Calculator!