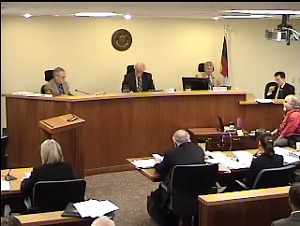 At 3:50 p.m. MST today, after about four hours of testimony and an additional half hour of deliberation, the Colorado Public Utilities Commission approved the settlement to restart the Solar Rewards program and revisit the issue in 2012.

The Commission heard testimony today in support of a settlement proposal between Xcel Energy and Colorado solar groups regarding the utility’s Solar Rewards program.

All three members of the Commission agreed that the situation in which these hearings came about was unfortunate, and that the settlement isn’t perfect.

“When you’re not provided the details, it’s a difficult decision,” said Commission Chairman Ron Binz. “I’m not convinced that the numbers in [the settlement] are right. Collectively, you should all find a better way to run this railroad without so many boons and busts.”

But Binz said he was ultimately impressed with how fast the parties came to an agreement.

Instead of fighting one another, the common practice in past PUC hearings on the Solar Rewards program, both parties spent most of the day fighting for approval of the settlement.

Colin Murchie, director of government affairs for SolarCity, was one of those present to offer testimony in support of the settlement.

Murchie played a role in setting up California’s rebate program, and said that today’s settlement should go through and be approved.

One of the issues, Murchie said, was the accounting practices—securing funds before actually distributing them.

Neal Lurie, executive director of the Colorado Solar Industries Association, advocated for the settlement as well.

“It’s important to recognize the fact that we’re here because we support the settlement agreement,” Lurie said.

Lurie said that the settlement had three goals behind it: to get the marketplace moving again, help address the cash-flow crunch, and begin paying down the program’s debt.

“It’s not going to be an easy transition for businesses to move to this model,” said Lurie. But he said it was still in the industry’s best interest to get the program started right away.

Lurie said having a fixed amount per kilowatt hour is key in order for companies to secure financing. If those rebates are adjusted during the term, financiers may avoid supporting a project.

But the settlement is basically a stop-gap proposal, and only applies to 2011. All the parties involved will have to return to the drawing table and draft a proposal for 2012 and beyond.

Matt Futch, utilities program senior associate for the Governor’s Energy Office, said that he thinks the 2012 program should have a similar structure as the settlement approved today.

Before the ruling, there were some heated testimonies about the initial shutdown of the program, and suggestions that a third party should be put in place to oversee the REC payment. The Commission only has authority to oversee the rebate amount under the current system.

Binz suggested that the Commission could possibly fill that role. However, Binz will be leaving the Commission to work in the private sector before the parties reconvene to discuss any plans for the 2012 package.

Utility-scale solar power generation is now substantially more efficient in terms of the amount of land it uses for electricity generation than a decade ago. END_OF_DOCUMENT_TOKEN_TO_BE_REPLACED

END_OF_DOCUMENT_TOKEN_TO_BE_REPLACED

END_OF_DOCUMENT_TOKEN_TO_BE_REPLACED
Calculate How Much You Can Save By Going Solar!
Use The Web's Best Solar Calculator!