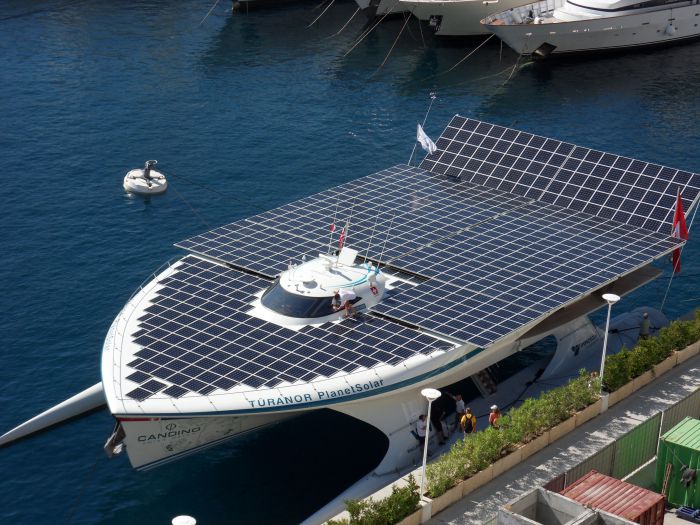 When the Turanor PlanetSolar boat docked on May 18 in Marigot, St. Martin, it broke the speed record for a transatlantic crossing in a solar-powered boat.

Of course, PlanetSolar had only its own record to beat.

Planet Solar was built in Kiel, Germany and is powered exclusively by solar panels. It completed an around-the-world voyage in 584 days between 2010 and 2012. The reason for the boat and its big journey then was to prove the viability of solar power.

During that first journey, it took the crew 26 days to cross the Atlantic in the PlanetSolar. While the boat is on a different mission this time around, carrying a crew of scientists to study the Gulf Stream, proving solar technology is still a part of the boat’s purpose.

“Once again, the boat provided a brilliant demonstration of solar energy's potential by breaking its own speed record for a transatlantic crossing set in 2010, improving it by 4 days, 6 hours, and 38 minutes,” said Gerard d’Aboville, the boat’s captain.

The speed record likely would have been even greater if not for some environmental hiccups along the way.

"It was necessary to make a significant deviation to the south,” d’Aboville said, “which increased the travelling distance by 7 percent, but enabled us to avoid winds and unfavorable swells."

The crew also encountered several cloudy days in a row and had to optimize the boat’s route in order to be as energy-efficient as possible.

After its journey around the world that ended in 2012, the boat received some maintenance and optimization, which d’Aboville credits with some of the increased speed.

He said the two journeys can’t be compared side by side because they were completed at different times of year. But the difference is still significant.

“She will now travel to Miami to begin her second life as part of an exploratory mission along the Gulf Stream current conducted by the University of Geneva," d’Aboville said.

The University of Geneva has sent a research team led by Martin Beniston, a climatology professor, on the boat. They will spend June through August traveling along the Gulf Stream and up the east coast of the United States, over to Iceland and Norway.

The PlanetSolar was the ideal vessel for the research trip because it doesn’t emit anything into the water that could contaminate samples.

END_OF_DOCUMENT_TOKEN_TO_BE_REPLACED

With the launch of SolarAPP+, it is expected that solar energy suppliers will be more amenable to providing services in remote areas, as it will make it easier to conduct code inspections and ensure compliance to get their requests approved faster. END_OF_DOCUMENT_TOKEN_TO_BE_REPLACED
Calculate How Much You Can Save By Going Solar!
Use The Web's Best Solar Calculator!