Not enough solar to go around in Ohio 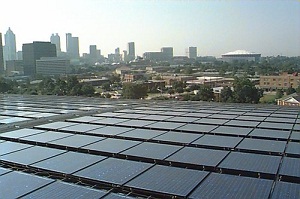 Power providers in Ohio aren’t able to get enough solar power to meet the state’s requirements. It’s not that they don’t want to, there just isn’t enough at this point.

Ohio has a carve-out for solar, requiring utilities to buy Solar Renewable Energy Credits (SRECs) for a certain amount of their generation, said First Energy Corp. spokesperson Mark Durbin. It’s a small amount as of 2011, at about 0.1 percent of their total power generation. However, that number will, most likely, grow each year.

But that’s not really the problem for First Energy. The utility has plenty of wind power in its portfolio, but not enough solar.

The power provider has signed up for all three solar projects that have come its way, according to Durbin.

“We’ve had three proposals and have bought them all,” he said. “It’s hard to make an offer on something that isn’t there.”

On the other hand, the company is a utility provider, not a solar installer or financier.

“Keep in mind that First Energy is not in the solar development business. Our strength is the fossil fuel plants and nuclear plants,” Durbin said.

Because of the dearth of available SRECs, First Energy recently filed with Ohio’s Public Utilities Commission to be exempted from the state’s requirement that it purchase 3,206 SRECS from facilities that generate solar power within the state. It’s also required to purchase 3,170 SRECs from solar generators outside of Ohio.

The solar carve-out will increase to 0.5 percent of utility’s energy portfolio by 2025, which will mean future hurdles for Ohio’s utilities as they try to keep up with the regulations.

However, Ohio is adding more solar.

Ohio Department of Development spokesperson Bethany McCorkle said that at least three projects are slated to start construction in 2011.

Those are the 12-megawatt Wyandot Solar farm, the 1.1 DP&L Solar Array and the 50-MW Turning Point Solar. But none of those are in First Energy’s territory.

The company will, however, buy the SRECs from the 9.8 MW array that’s being built at the Campbell Soup Co. in Ohio. Whether or not it will be enough to meet its needs remains to be seen.

END_OF_DOCUMENT_TOKEN_TO_BE_REPLACED

With the launch of SolarAPP+, it is expected that solar energy suppliers will be more amenable to providing services in remote areas, as it will make it easier to conduct code inspections and ensure compliance to get their requests approved faster. END_OF_DOCUMENT_TOKEN_TO_BE_REPLACED
Calculate How Much You Can Save By Going Solar!
Use The Web's Best Solar Calculator!