Now could be the best time to buy solar stocks 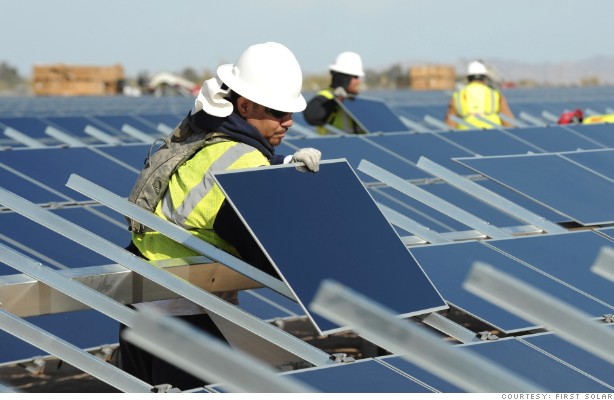 Solar stocks have been climbing in recent moths.

Of course, they had a big hole to climb out of after plummeting solar panel prices, oversupply, disappearing government incentives and a wide array of other market factors influencing investors with stock in some of the biggest solar panel manufacturers from Jinko Solar and First Solar to SunPower.

The stocks are on the rise now despite some dips here and there, and a lot of analysts believe the trend will stick this time even if stock prices don’t surge immediately to the epic highs they reached before the market started to fall in 2011.

Jinko Solar reported on Friday that its first quarter shipments rose 36 percent from the same quarter a year ago.

The good news sent Junko’s stock soaring. It was up 6.5 percent early in the day.

While Jinko was up, other solar stocks were also climbing.

There’s good reason to be optimistic about the solar market, according to a recent report from Lux Research, which analyses emerging technologies and their markets.

Because solar has gone through such a rough spot, Lux argues in its report that this is the time to “buy low” and ride promising companies up.

“The industry’s rough maturation has cast it in a poor light, but solar’s growing presence in the future energy mix is undeniable,” according to the report. “It remains to be seen is which corporate leaders will find mutually beneficial partnerships and investments early and reap the rewards of growth for a low price, and which laggards will miss out on the opportunity.”

The hard times helped to weed out some underperforming companies and forced the strong to look for new markets. That push to develop new pipelines for product made some companies innovators and spurred market growth in some parts of the world that might not have seen significant solar growth otherwise. It also drove panel prices so low that solar energy is cost competitive without subsidies in some parts of the world.

Those changes coincide with others that will make strong players successful, particularly a balancing out of supply and demand expected in 2015.

“The growth of new markets like China will lead to global demand growth from 31 gigawatts in 2012 to 52 gigawatts in 2015,” according to Lux. “In combination these will lead to module oversupply of only 12 percent, down from 100 percent in 2012. As a result, module margins will recover up to 10 percent from their near-zero averages today.”

After decades of research, the solar industry has finally started to develope the underlying technology behind “transparent” solar panels. END_OF_DOCUMENT_TOKEN_TO_BE_REPLACED

Sustainable energy sources are rapidly soaring in popularity in different parts of the world. The world's dependence on renewable power sources will significantly increase in the foreseeable future. END_OF_DOCUMENT_TOKEN_TO_BE_REPLACED

Being able to charge your EV with a solar panel roof while you are driving is no longer a fancy dream. END_OF_DOCUMENT_TOKEN_TO_BE_REPLACED
Calculate How Much You Can Save By Going Solar!
Use The Web's Best Solar Calculator!