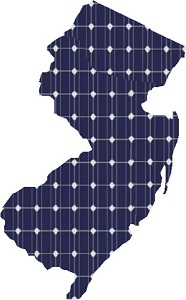 Sprinters, marathoners and NASCAR drivers all know: When you’re in the lead, don’t let up. That’s the philosophy New Jersey seems to be adopting in the race to build solar installations, even though sustainability and energy self-reliance aren’t as shiny and exciting as a medal for first place—or second place, which is where the state sits in U.S. rankings for solar power production.

But it may not stay there long if it has more months like June.

New Jersey stands behind California but ahead of sunlight-rich, large states like New Mexico, Arizona, Texas, Colorado and Nevada.

“We put the right policies in place, and the right mechanisms, to help to jump start the industry,” she said. “And the industry’s taken advantage of that.”

New Jersey has built its solar network mostly through rooftop installations rather than large-scale solar projects with dedicated land. That could change under a new plan from Gov. Chris Christie that emphasizes large-scale projects.

Siekerka said that the draft of the plan moves the state’s focus to larger projects.

“Those might be larger rooftop projects on commercial and industrial buildings, but we’re also planning projects on landfills and brownfields,” she said.

Brownfields, sites that include contamination, would need cleanup before panels could be installed. A state website confirmed that landfills and brownfields are possible sites for solar.

In the past, Christie has suggested larger solar farms would benefit more people than single-home or single-business installations. Siekerka agreed, saying New Jersey aimed for more drastic measures than panels on the roofs of houses.

“Those types of projects will bring beneficial gains to the entire state because they’ll be taking larger users off the grid,” she said. “It’s part of the strategy of diversifying our portfolio and moving toward clean energy to offset fossil fuels.”

In 2020, wind power generated over 300 terawatt-hours, or 7.29 percent of the total electrical energy in the country, surpassing hydroelectric power as the biggest source of renewable energy in the US. END_OF_DOCUMENT_TOKEN_TO_BE_REPLACED

END_OF_DOCUMENT_TOKEN_TO_BE_REPLACED

Now is indeed the best time to invest in solar panels, especially if you want to double your ROI during the course of its lifespan. END_OF_DOCUMENT_TOKEN_TO_BE_REPLACED
Calculate How Much You Can Save By Going Solar!
Use The Web's Best Solar Calculator!