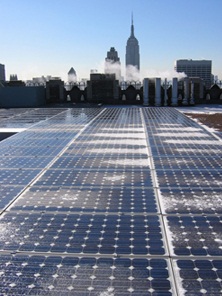 When people think about New York City, they don’t think of the city as a sunny place, visitors know it for canyon-like streets and alleys walled in by tall apartments, condos and turn-of-the-century skyscrapers.

However, New York City and Westchester County, N.Y., more than doubled the amount of photovoltaic installations in the region in 2010.

According to Con Edison, a subsidiary of Consolidated Edison, Inc. (NYSE: ED), the utility for the region, its customers installed 4.5 megawatts of photovoltaic generation in 2010. That’s more than double the 1.9 megawatts of solar installed in 2009.

By the end of 2009, the company had 8.5 megawatts of solar its system. The number of actual installations completed in 2010 jumped to 203 from 134 the previous year.

Con Edison spokesperson Allen Drury said the company does not have estimates for how much more solar will be added in 2011 or beyond.

“We think that with the momentum that has been generated the next several years could be very productive,” he said. “The New York Power Authority and the city of New York both have solar initiatives that will bring projects to the city.

To help more residents add solar, the company is working with City University of New York to make the application process for net metering even easier and quicker, said Drury.

“We are a key player in the 100 Days of Solar initiative, which aims to reduce the approval time for solar applications to 100 day,” he said.

The company and the university plan to implement a solar resource map in 2011, which will help customers learn more about their solar resources.

The steps that Con Edison already took to promote solar have paid off.

“We reached out to our customers and explained the economic and environmental benefits of using sun power in their homes and businesses,” said Con Edison Vice President of Engineering and Planning Robert Schimmenti. The information includes how Con Edison net meters and the application process. He said that the company also shortened the approval process for residential systems, typically under 25 kilowatts, and created a customer web site for customers that want to install solar.

The zones are areas that get the best sunlight in the region, targeted areas for incentives and other forms of assistance to help more New Yorkers go solar.

Image courtesy of Con Edison of the Rockefeller Center.

These 10 cities have been claimed by the researchers to have the largest solar investments in the US. END_OF_DOCUMENT_TOKEN_TO_BE_REPLACED

After decades of research, the solar industry has finally started to develope the underlying technology behind “transparent” solar panels. END_OF_DOCUMENT_TOKEN_TO_BE_REPLACED
Calculate How Much You Can Save By Going Solar!
Use The Web's Best Solar Calculator!