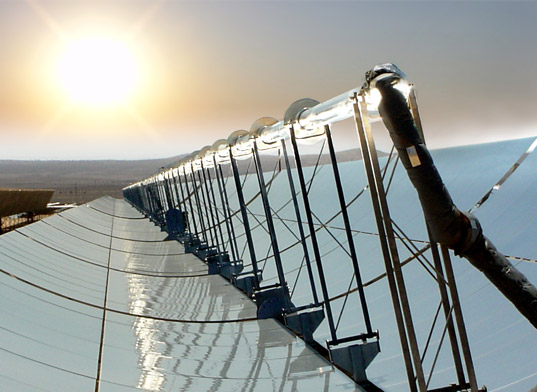 Interior Secretary Sally Jewell announced this week at the National Clean Energy Summit in Las Vegas that President Barack Obama’s administration has officially established more than 64,000 acres of private and public land managed by the Bureau of Land Management in Southern California’s Imperial Valley for solar and geothermal development.

The land is situated between the Salton Sea and the Marine Corps’ Chocolate Mountain Gunnery Range.

“As we double down on the unprecedented progress that the Obama administration has made on advancing clean energy, the Interior Department has an opportunity not only to cut carbon pollution, but also to advance important conservation goals," Jewell said.

In addition to solar, 19,000 acres of the BLM land was designated for geothermal development. Between new solar and geothermal energy development on the land, Jewell said it could produce more than 3,000 megawatts of electricity – enough to power almost 1.2 million average American homes.

The potential of the newly established solar energy zone combines with 47 solar energy projects already approved for development on public lands since 2009. If all are completed, they will produce more than 13,000 megawatts of solar energy. That’s enough to power more than 4.6 million homes.

In June, he challenged the Interior Department to approve another 10,000 megawatts of renewable energy projects before 2020, a goal that seems attainable after the department approved more than 13,000 megawatts of projects in the last four years.

Utility-scale solar power generation is now substantially more efficient in terms of the amount of land it uses for electricity generation than a decade ago. END_OF_DOCUMENT_TOKEN_TO_BE_REPLACED

END_OF_DOCUMENT_TOKEN_TO_BE_REPLACED

END_OF_DOCUMENT_TOKEN_TO_BE_REPLACED
Calculate How Much You Can Save By Going Solar!
Use The Web's Best Solar Calculator!