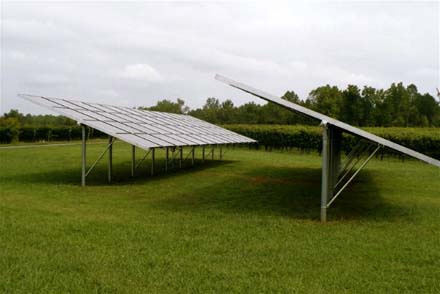 Solar development is apparently growing by leaps and bounds in North Carolina.  North Carolina isn’t typically the first state that comes to mind when most people think about solar energy.  Surprisingly, however, it was ranked second in the country for installed solar during the second quarter of 2013 according to an August report from industry analysis firm NPD Solarbuzz.

Duke Energy Renewables announced earlier this week that it will be adding 5 megawatts of utility-scale solar to its current 12.5-megawatt Washington White Post project. Once the addition is complete, the 17-megawatt solar farm will be the largest in the state.

Analysts doubt the status will last, however.

The Charlotte Business Journal reported on Aug. 30 that there several billion dollars worth of proposed solar development projects in the pipeline with companies like Strata Solar and SunEnergy1blazing the trail.

SunEnergy1 has proposed nine new projects over the last six weeks. Strata has 11 projects on the drawing boards.

The surge in solar activity is credited in part to the state’s renewable energy portfolio standard enacted six years ago. The standard requires investor-owned utility companies to get 12.5 percent of their electricity from renewable sources by 2020. North Carolina also offers attractive tax incentives.

The biggest reason for the boom could simply be increased interest from investors willing to support solar projects in a state where tax and utility programs seem relatively stable.

The state was second only to California in NPD’s most recent ranking and Northa Carolina is expected to see an 80 percent increase in solar growth by the end of this year.

In fact, SunEnergy1 alone has more than $328 million of proposed projects in the pipeline, according to the Charlotte Business Journal.

“We have partnered with investment houses and financial institutions outside the state that find value now in the N.C. solar markets,” SunEnergy1 CEO Kenny Habul told the journal.

Investors are finding value in the market largely because the cost of solar panels and installation has plummeted over the past five years. Projects are bigger and more economical now, opening the door for strong profits in an emerging industry.

“I think it’s a combination of a rebound in the overall economy in the country, a good marketplace for solar in North Carolina and the dramatic reduction in build out costs,” Baker Renewable Energy Vice President Jason Epstein told the journal.

Utility-scale solar power generation is now substantially more efficient in terms of the amount of land it uses for electricity generation than a decade ago. END_OF_DOCUMENT_TOKEN_TO_BE_REPLACED

END_OF_DOCUMENT_TOKEN_TO_BE_REPLACED

END_OF_DOCUMENT_TOKEN_TO_BE_REPLACED
Calculate How Much You Can Save By Going Solar!
Use The Web's Best Solar Calculator!