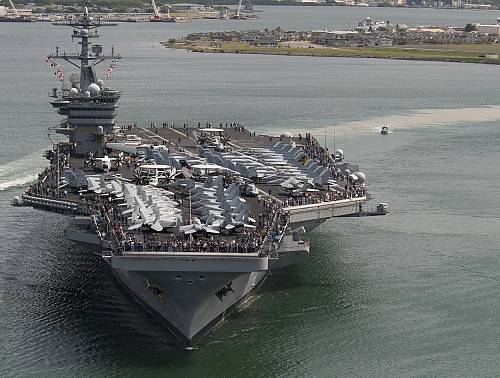 The Navy’s Office of Naval Research and Asia Pacific Technology Education Program invested $30 million in the Energy Excelerator, which provides up to $100,000 in seed money to promising new clean-tech startups.

Hawaii is uniquely positioned for the success of such companies, according to a release from the Navy. The island state has the highest energy costs in the country because it relies almost entirely on imported fossil fuels for electricity generation. Those high utility costs, coupled with abundant solar, wind, hydro, geothermal and other renewable energy resources, make the state rich when it comes to developing and implementing new clean technologies, according to the release.

The Navy was keen to invest in the start-up fund because it has a significant presence in Hawaii and sees the need for continuing advances in solar energy and other clean technology development.

"In the modern era, technological breakthroughs offer unprecedented opportunities to move toward diversified energy sources," stated Richard Carlin, director of ONR's Sea Warfare and Weapons Department. "It's vital for our sailors and Marines and the nation to discover and develop new sustainable sources of energy, as well as dramatically improve the way we manage energy."

The Excelerator has successfully launched several clean technology startups since it began providing funding for projects that otherwise struggled to find venture capital. Companies incubated in the program raised $38 million in additional outside funding last year alone, according to the release.

Early stage investment like that provided by the Energy Excelerator program is essential to developing new renewable energy, solar and energy storage technologies because venture capitalists are often shy about investing in such technologies at their earliest stages, since projects tend to take a long time to commercialize and move to market.

"The Energy Excelerator helps startups succeed, starting in Hawaii – one of the best early markets for energy innovation," Dawn Lippert, the Excelerator’s senior manager, said. "We are excited to see ONR supporting companies that have the potential to make a really big impact in solving global energy problems."

After decades of research, the solar industry has finally started to develope the underlying technology behind “transparent” solar panels. END_OF_DOCUMENT_TOKEN_TO_BE_REPLACED

Sustainable energy sources are rapidly soaring in popularity in different parts of the world. The world's dependence on renewable power sources will significantly increase in the foreseeable future. END_OF_DOCUMENT_TOKEN_TO_BE_REPLACED

Being able to charge your EV with a solar panel roof while you are driving is no longer a fancy dream. END_OF_DOCUMENT_TOKEN_TO_BE_REPLACED
Calculate How Much You Can Save By Going Solar!
Use The Web's Best Solar Calculator!