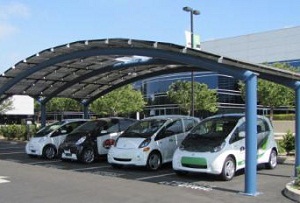 People will initially be able to charge their cars for free at the site, said Mitsubishi Electric spokesperson Mark Scott.

“There’s going to be no cost to the user. It’s in the early adoption period for EV cars,” he said.

The station was launched prior to MMNA’s U.S. introduction of the Mitsubishi i electric vehicle, which is expected to be available as early as November of this year. The vehicle is expected to cost roughly $20,000 after tax and other incentives.

The charging station’s CHAdeMO connection can charge an electric car to 80 percent capacity in 25 minutes, according to a press release. However, the cars have to be equipped with CHAdeMO-based computers using the quick charge feature, said MMNA spokesperson Maurice Durand.

“It’s like saying the car speaks English. The computers on the charger and the car have to be compatible,” he said.

The CHAdeMO charger is the quick charge designation agreed upon by Japanese vehicle manufacturers, according to Durand.

“There’s also another standard done by the domestic manufactures. It’s like Betamax versus VHS all over again,” he said.

“The plug is a standard. The charging language isn’t standard at this point,” Durand said.

The charging station is powered by 96, 175-watt Mitsubishi Electric photovoltaic modules. The modules are about 16 percent efficient, according to Scott. Another feature of the modules is that they don’t have any lead in them.

“We’d like to see these kinds of installations at universities, shopping malls and schools,” Scott said. MMNA could also install the chargers at their dealerships. “We’d love to see them at intervals at various locations.”

Utility-scale solar power generation is now substantially more efficient in terms of the amount of land it uses for electricity generation than a decade ago. END_OF_DOCUMENT_TOKEN_TO_BE_REPLACED

END_OF_DOCUMENT_TOKEN_TO_BE_REPLACED

END_OF_DOCUMENT_TOKEN_TO_BE_REPLACED
Calculate How Much You Can Save By Going Solar!
Use The Web's Best Solar Calculator!