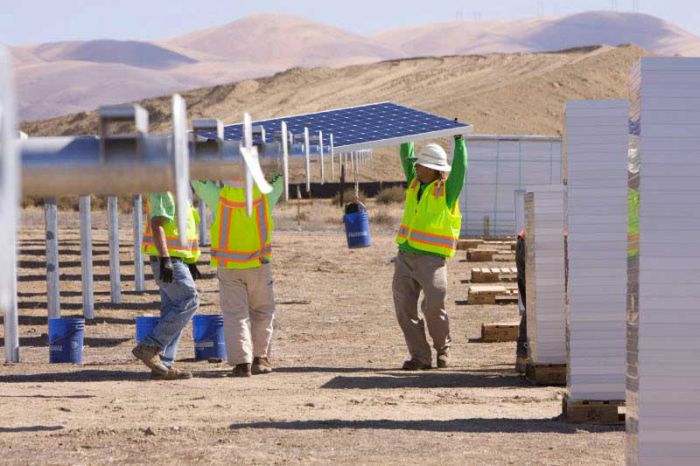 MidAmerican Solar, a subsidiary of Warren Buffet-controlled Berkshire Hathaway’s Mid-American Energy Holdings Co. is planning to issue $700 million in secured senior notes to support the $2.7 billion Solar Star project, which was formerly known as the Antelope Valley Solar Projects. The bonds, beings issued by Solar Star Funding, LLC, will support construction of the Solar Star projects, which MidAmerican bought from SunPower in January 2013.

SunPower is currently building the Solar Star projects, which, when completed in October 2015, will consist of 597 megawatts of AC electric generation. Once complete SunPower will provide ongoing operations and maintenance of the projects, which are co-located in Kern and Los Angeles Counties, Calif.

Though MidAmerican has not yet issued the notes, investment and ratings analysts and firms have already placed preliminary ratings on them. Among them Fitch Ratings, which maintains a rating of BBB+ on MidAmerican, plans to issue a rating of BBB- on the bonds when they’re issued. Similarly Standard & Poor’s is issuing a preliminary BBB- rating on the notes. It is anticipated that the offering, when tendered, will be led by Barclays Plc, Citigroup Inc. and Royal Bank of Scotland Group Plc, Bloomberg reported.

In a research note, Fitch explained that the bond issuing earned rating for a number of factors. Among them, MidAmerican’s strength as a company, the projects’ low completion risk, scheduling surplus and SunPower’s previous performance in building giant PV plants. Fitch also observed, “Revenue risk is low with annual escalating, fixed-price, 20-year power purchase agreements (PPA) with offtaker, Southern California Edison…generally matching the term of the debt. The guaranteed energy production requirement is not onerous. PPA termination risk is low and comparable to other Fitch-rated solar power projects.”

Fitch also anticipated MidAmerican will offer a second bond issuance of $575 million. It said such an offering would be made after financial close and subject to an affirmed rating on the first series of bonds.

This is the second large-scale PV project that MidAmerican is issuing bonds for. It previously offered an initial $850 million in bonds to support its 550 megawatt Topaz Solar Farm, which is being built by First Solar. The first round of bonds for that project also earned a BBB- rating from Fitch. A subsequent, $250 million issuance of bonds earned a rating of BBB from the company.

MidAmerican is one of the first companies in the US to offer bonds to support its solar projects. In doing so it opens up the door to more potential investors than it would if it seeked to finance the projects through banks or other financial institutions. It also helps lower the cost of financing for the project, since the bonds aren’t slated for repayment until 2035.

END_OF_DOCUMENT_TOKEN_TO_BE_REPLACED

Researchers at the Northeastern Center for Renewable Energy Technology (NUCRET) are exploring trees as a natural resource to create new sustainable materials. END_OF_DOCUMENT_TOKEN_TO_BE_REPLACED

As of January 1st, 2020 home owners could claim 30% of the installation cost as deductions while filing their taxes, this has changed significantly this year. END_OF_DOCUMENT_TOKEN_TO_BE_REPLACED
Calculate How Much You Can Save By Going Solar!
Use The Web's Best Solar Calculator!