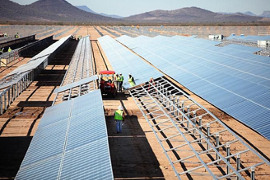 Construction on the largest solar photovoltaic array in Latin America is getting underway in Mexico.

The 30-megawatt Aura Solar plant in La Paz, Baja California Sur, Mexico is the country’s first utility-scale solar installation with a power purchase agreement with the federal power company, according to a release from Suntech.

The Chinese solar module manufacturer will supply 132,000 solar panels for the project.

All of the businesses involved in developing, constructing and managing the solar array expect this 30-megawatt array to be the first of many solar plants in Mexico and the rest of Latin America during the next decade.

“Aura Solar has broken ground in the PV sector,” said Hector Olea, CEO of Gauss Energia, a Mexican firm that is developing the project. “And it is paving the way for future projects in the field.”

Olea said the Mexican solar market is expected to grow rapidly, developing upward of 2,000 megawatts of solar capacity in the country by 2020.

The opportunity for solar in Mexico and other parts of Latin America results from a combination of lower solar panel prices and rising electric rates in the region.

Mertifer Solar, a Portuguese firm helping to develop the Aura Solar plant, aims to do continued business in Mexico and throughout Latin America, according to the release from Suntech.

"The construction of Latin America's largest PV plant confirms our best expectations for 2013,” Martifer CEO Henrique Rodrigues said in a statement. “This is an emblematic project for Martifer Solar, in a region that, due to its irradiation characteristics, finds solar electricity as a viable and more competitive alternative, when compared with non-renewable energy sources. We consider Mexico as a key market in Martifer Solar's internationalization strategy."

Already under construction, the Aura Solar Plant is expected to be completed in August of this year. When it’s finished the plant will produce about 82 gigawatt hours of solar a year and offset more than 60,000 tons of Co2 emissions, according to the Suntech release.

The project could be the launch point for all of the international companies involved I developing it for future opportunities in Latin America.

"We are very excited to supply the panels for the largest solar field in Latin America,” said E.L. McDaniel, director of Suntech America. “With Mexico's excellent sunlight and strong renewable energy demand, we expect to see excellent growth of PV in the region."

Utility-scale solar power generation is now substantially more efficient in terms of the amount of land it uses for electricity generation than a decade ago. END_OF_DOCUMENT_TOKEN_TO_BE_REPLACED

END_OF_DOCUMENT_TOKEN_TO_BE_REPLACED

END_OF_DOCUMENT_TOKEN_TO_BE_REPLACED
Calculate How Much You Can Save By Going Solar!
Use The Web's Best Solar Calculator!