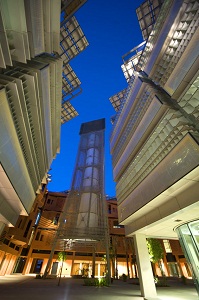 One of the world’s most ambitious carbon-neutral projects, Masdar City, has overcome some major obstacles and faces even more to achieve its prominent status, said one of its creators.

Jack Whittier, a senior technologist with CH2M Hill, spent the last three years in Abu Dhabi in the United Arab Emirates building Masdar City. He spoke at the renewable energy gala, hosted by The Renewable Energy Initiative aimed at increasing private investment in solar, wind and other new energy tech, in Denver, Colo. this week.

Masdar is an incredibly impressive endeavor. Built on a 7-square kilometer patch of desert land a few miles inland from the Persian Gulf, Masdar’s buildings are among the most energy efficient in the world and are power with solar photovoltaic panels and cooled with geothermal, Whittier said.

Abu Dhabi was once one of the poorest places on the globe. But when oil was discovered there, it launched the country into great wealth.

Now that the country’s young people have had opportunities to travel the world and study in U.S. and European universities, they see a different future for their country, Whittier said.

On urgings from the country’s youth, the E.A.U. agreed to divert a significant portion of one of its wealth funds to creating Masdar City.

At the heart of the new community is a major university, the Masdar Institute of Science and Technology, which is closely partnered with the Massachusetts Institute of Technology.

In constructing a carbon-neutral community, the first step was to build energy-efficient buildings, Whittier said.

“We drove down the demand as much as we possibly could and then we tackled supply,” he said.

The most accessible renewable energy source in Masdar City is solar, Whittier said. They built a 10-megawatt solar photovoltaic farm, half with traditional solar panels and the other half with thin-film for testing and scientific purposes.

“When we started this I think it was the seventh largest solar array in the world,” Whittier said. Now it’s not even a blip.”

“We gave up on growing our own food early on,” he said. “And we had to give up on water. It was a major disappointment, but we couldn’t do it.”

The water under the city was several times more salinated than the water in the Gulf and it would have taken too many resources to desalinate it so the city connected to Abu Dhabi’s water supply, Whittier said.

Now the major challenge will be drawing people in and enticing them to live in a city built on principles of using less and living in smaller spaces and walking instead of driving. There are no cars inside Masdar City.

The new Abu Dhabi boasts the highest per capita number of sports utility vehicles in the world, Whittier said. And huge ostentatious luxury resorts are popping up three miles away along the Gulf Coast.

“This is what Masdar is competing with,” he said showing a shot of a resort that looked like half of it was draped in diamonds and came complete with a Ferrari racecourse.

Utility-scale solar power generation is now substantially more efficient in terms of the amount of land it uses for electricity generation than a decade ago. END_OF_DOCUMENT_TOKEN_TO_BE_REPLACED

END_OF_DOCUMENT_TOKEN_TO_BE_REPLACED

END_OF_DOCUMENT_TOKEN_TO_BE_REPLACED
Calculate How Much You Can Save By Going Solar!
Use The Web's Best Solar Calculator!