On Eve of Completion, Liberty Interactive Invests $300M in Solana 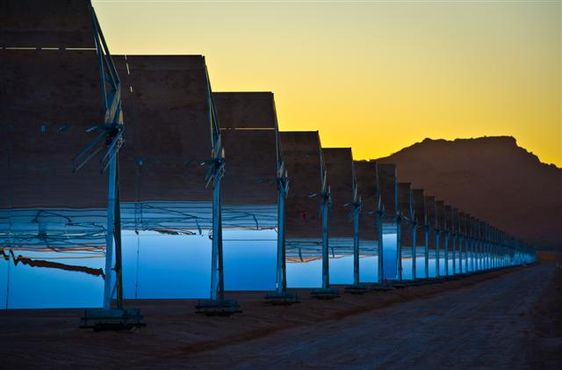 Abengoa Solar’s first giant concentrating solar power system in the U.S., the 280 megawatt Solana Project, is nearly complete and is in final testing stages. And on the eve of completion the project, which is located near Gila Bend, Ariz., Liberty Interactive Corp has announced that the company will be investing $300 million.

The $300 million only represents a portion of ownership in the $2 billion project, which is supported by a $1.45 billion loan guarantee from the federal government. As such, the investment had to be approved by the U.S. Department of Energy (DOE) and the Federal Energy Regulatory Commission (FERC). Abengoa will remain the managing partner of the project and will manage, operate and maintain the plant. Arizona Public Service (APS) will be purchasing all power produced at the Solana project through a power-purchase agreement.

Abengoa said Solana is the largest parabolic trough solar plant in the world and the first in the U.S. with thermal energy storage, which allows the storage of energy for up to six hours without light.

“One of the advantages of CSP over other renewables is its ability to store energy efficiently,” said a spokesperson from Abengoa. “The thermal storage system makes the energy generated dispatchable, permitting plant operation during transient periods or after sundown. This dispatchability eliminates the intermittency that other renewables, like wind or photovoltaics, experience and thus the electricity generated from CSP plants has a higher value.”

The final testing of the system will ensure that the plant can deliver the power it promises. "During these final tests, the concentrating solar power (CSP) plant is demonstrating that it will generate electricity during the day and night, and its capacity to store energy and adapt to consumption demands,” the spokesperson added.

The land the project sits on was previously used for agricultural purposes, according to Abengoa. As a result, Solana reduces the amount of water needed at the site to 25 percent of what it used to need. These reductions will help reach state renewable energy goals, as well as reach the U.S. national goals for climate change mitigation.

The new investment should help Abengoa - which has 931 megawatts of CSP (both solar towers and troughs) in operation and 710 megawatts under construction, as well as CSP projects in general - attract more investments. While photovoltaics have taken off in the past few years, the CSP market has not seen an massive influx of new projects undertaken. But with completion near for Solana, as well as BrightSource’s Ivanpah Solar Energy Generating System, interest in CSP may again be on the uptick.

Approval is expected soon on Gemini, a huge 7,000+ acre solar farm served by Warren Buffet’s NV Energy, thus making it the largest solar farm in all of America. END_OF_DOCUMENT_TOKEN_TO_BE_REPLACED

END_OF_DOCUMENT_TOKEN_TO_BE_REPLACED

END_OF_DOCUMENT_TOKEN_TO_BE_REPLACED
Calculate How Much You Can Save By Going Solar!
Use The Web's Best Solar Calculator!