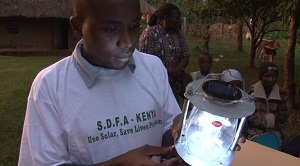 Every year, CNN chooses its Top 10 Heroes—ten selfless community crusaders from around the world who make a significant difference in people’s lives daily—and from this list, readers choose the CNN Hero of the Year.

This year, one of the Top 10 Heroes is 23-year-old Evans Wadongo, a native Kenyan who has distributed more than 10,000 solar lanterns to poor rural communities in Kenya for free.

The lanterns, known as “Mwangabora,” the Kenyan term for “better light,” also serve an important economic function. By offsetting the money normally used to buy kerosene fuel—an average of $4 USD a week—villagers in distressed communities are able to buy food and begin to lift themselves out of poverty.

To date, Use Solar, Save Lives has aided in the start of 15 unique economic community ventures, improving education standards by providing light for students, and providing income for sustenance in poor, rural communities.

Wadongo notes that 65,000 people have been helped so far thanks to the distribution of solar lanterns, many of whom are school-age children.

But he wants to do more. His goal is to distribute 100,000 solar lanterns and set up a workshop in Kenya for the production of the lanterns, each of which costs 25 dollars to produce. He’s hoping being named a Top Ten Hero by CNN will help bring awareness to his cause and garner support from individuals, non-profits, and other organizations.

“I got the idea when I was working on Christmas lights during my first year in campus,” said Wadongo. “And I reflected back on my upbringing and the life I went through. It’s the best thing we can do for these communities.”

Readers can vote for Wadongo as CNN Hero of the Year on the CNN website.

Utility-scale solar power generation is now substantially more efficient in terms of the amount of land it uses for electricity generation than a decade ago. END_OF_DOCUMENT_TOKEN_TO_BE_REPLACED

END_OF_DOCUMENT_TOKEN_TO_BE_REPLACED

END_OF_DOCUMENT_TOKEN_TO_BE_REPLACED
Calculate How Much You Can Save By Going Solar!
Use The Web's Best Solar Calculator!