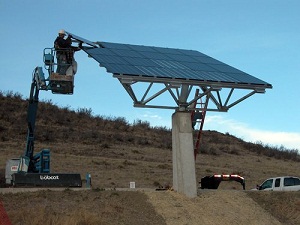 The Department of Energy’s (DOE) Loan Guarantee program would be effectively eliminated under two sections of the House of Representative’s budget proposal in H.R. 1. The loan guarantee program offers developers of solar projects and solar companies an important tool to gaining easier and quicker access to loans and financing for large-scale solar projects or operations expansions for solar manufacturers.

Sections 1425 and 3001 of the proposal would eliminate the loan guarantee program, which advocates said is instrumental in keeping solar projects moving forward and creating tens of thousands of new jobs.

The Solar Energy Industries Associate (SEIA) issued a call to action this morning, asking people to write their legislators to strike the sections from H.R. 1.

“It would be a huge breach of trust and faith for Congress to eliminate this program, as the projects are nearing finalization of terms and financial closing,” stated the SEIA release. “Many have invested significant time and money during the lengthy approval process.”

The loan guarantees have supported projects like the 250 megawatt Abengoa Solar project in Arizona, which, thanks to the loan guarantee program, secured a $1.45 billion loan to start construction. It also helped Abound Solar in Colorado secure $400 million to expand manufacturing of its thin-film photovoltaics, which, when completed, will make the company one of the largest solar producers in the world.

The loan guarantee program doesn’t actually offer loans to companies. It gives them the financial backing of the Department of Energy, in case the company defaults on a loan it secured elsewhere.

The DOE has issued almost $18 billion for guaranteed loans and conditional commitments.

None of the companies that have used the loan guarantees to secure additional funding have thus far defaulted on their loans, according to Meeks.

Although solar projects and companies are delivering on their promises, Solar Energy Industries Association spokesperson Monique Hanis said that the technologies being used are still new to investors, that and because the economy is still in recovery, the loan guarantee program gives potential investors a greater feeling of security.

“The government is very helpful to attract the financial community and help get access to lower-cost funds,” Hanis said. “It sort of gives a sense of security or confidence in the project to get it moving forward.”

Without the funding, Hanis said, a lot of solar projects and expansion could be delayed.

“Some of them may not get financing,” she said.

These 10 cities have been claimed by the researchers to have the largest solar investments in the US. END_OF_DOCUMENT_TOKEN_TO_BE_REPLACED

After decades of research, the solar industry has finally started to develope the underlying technology behind “transparent” solar panels. END_OF_DOCUMENT_TOKEN_TO_BE_REPLACED
Calculate How Much You Can Save By Going Solar!
Use The Web's Best Solar Calculator!