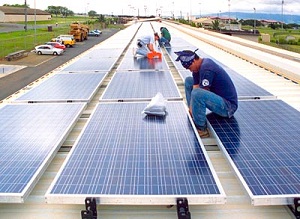 It was a year of unprecedented growth in Hawaii as the number of installed, customer-cited solar arrays on Oahu, Hawaii Island and Maui County more than doubled from 2009 to 2010.

“Interest in solar power has steadily increased in recent years, but it really took off in 2010,” Robbie Alm, Hawaiian Electric executive vice president, said in a press release announcing the solar growth.

Hawaiian Electric said the systems it counted included net-metered systems and those under standard interconnection agreements with the utility.

“Interest in net energy metering started to increase in 2008, when crude oil prices spiked at $147 a barrel,” the company said.

Darrek Fujikami, solar energy specialist with the Hawaii Department of Business Economic Development and Tourism, said the growth can be attributed to three factors.

“I think part of it is the public understanding the programs that are out there, that everyone wants to go green, and we have tax incentives. It’s a combination of all three,” he said.

The Hawaiian solar incentives are high, particularly when combined with incentives from the federal government. According to Fujikami, when combined, state and federal tax incentives in Hawaii can cover up to 65 percent of a solar installation.

Electric prices in Hawaii are high because most of its generation now comes from petroleum-based generators, and it has to be imported via ships. As of October 2010, the average price for electricity at 28.5 cents per kilowatt hour was more than double the average U.S. price at 11.93 cents per kilowatt hour, according to the Department of Energy’s Energy Information Administration.

With the high cost of utility-supplied electric generation, full payback of a solar installation can be achieved in Hawaii within five to six years, Fujikami said.

The state also has the nation’s highest renewable energy standard, which will require utilities to source 40 percent of the electricity they produce from renewable sources like wind and solar by 2030.

Although Fujikami didn’t have predictions for the growth of solar in 2011, he said it will continue to grow.

“There are some developers out there that are looking at photovoltaic farms, although we haven’t really had any break ground yet,” he said.

While solar is gaining on wind in the state, it still has to catch up.

“The majority of renewables right now are on the wind side,” he said. “It seems to be the dominant renewable currently.”

In 2020, wind power generated over 300 terawatt-hours, or 7.29 percent of the total electrical energy in the country, surpassing hydroelectric power as the biggest source of renewable energy in the US. END_OF_DOCUMENT_TOKEN_TO_BE_REPLACED

END_OF_DOCUMENT_TOKEN_TO_BE_REPLACED

Now is indeed the best time to invest in solar panels, especially if you want to double your ROI during the course of its lifespan. END_OF_DOCUMENT_TOKEN_TO_BE_REPLACED
Calculate How Much You Can Save By Going Solar!
Use The Web's Best Solar Calculator!