Clean energy company to give solar stoves to Haiti 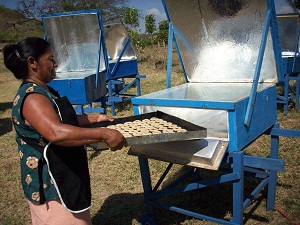 Haiti is beneficiary of many a solar invention this holiday season as companies are ramping up their seasonal giving. And now, 150 to 200 Haitian households can look forward to receiving a solar cooker, thanks to donations from Clean Currents, a renewable energy company based in Rockville, M.D.

Clean Currents sells wind power through the grid in those eastern states that allow energy companies to compete for utility business.

The company has only existed since 2005 and has always done some holiday giving, communications director Eric Vermeiren said.

“There are only 18 of us in the company,” he said. “And it’s been hard to escape the news of tragedy in Haiti this year.”

When the whole company gathered a couple months to decide what it would do for the holidays this year, solar cookers seemed like a logical and useful choice.

“We are a clean energy company, and the solar cookers just seemed like a good fit,” Vermeiren said.

Solar Cookers International, the organization that Clean Currents partnered with, has successfully distributed solar stoves to families all over the developing world, Vermeiren said.

They are a good alternative to the traditional charcoal, wood or kerosean cookers that are not only costly, but also cause significant indoor air pollution, Vermeiren said.

"Solar cookers are cheap, simple, and easy to maintain. By harnessing the abundant power of the sun, solar cookers provide a measure of independence to those who use them—and they decrease a user's reliance upon traditional sources of cooking fuel like charcoal, which is costly and very polluting," Clean Currents presidents Gary Skulnik was quoted in a press release.

Clean Currents giving program launched Nov. 23 and will go through Jan. 12, the one-year anniversary of the tragic earthquake that left the island nation devastated.

“We’re kind of shooting for 200,” Vermeiren said. “But we’re going to kind of see where our enrollments bring us.”

Vermeiren said Clean Currents will donate money to Solar Cookers International for every new enrollment to its energy program between now and Jan. 12 specifically to bring solar cookers to the hardest-hit part of Haiti, the capital city of Port-Au-Prince.

Utility-scale solar power generation is now substantially more efficient in terms of the amount of land it uses for electricity generation than a decade ago. END_OF_DOCUMENT_TOKEN_TO_BE_REPLACED

END_OF_DOCUMENT_TOKEN_TO_BE_REPLACED

END_OF_DOCUMENT_TOKEN_TO_BE_REPLACED
Calculate How Much You Can Save By Going Solar!
Use The Web's Best Solar Calculator!