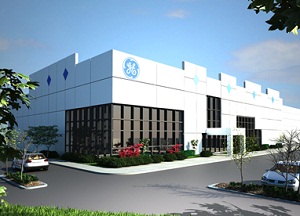 At 400 megawatts of annual production capacity, it will be the largest PV manufacturing facility in the U.S. It’s a big splash for GE’s entry into commercial production of cadmium telluride (CdTe) photovoltaics.

GE will roll out the new manufacturing facility in the face of stiff competition from across the world and particularly from China. But GE is prepared for the challenge said GE’s General Manager for Solar Technology Danielle Merfeld.

“We are now ready with the technology that we know could play in this market,” she said. “We’ve spent a lot of time looking at the space, waiting until we had a technology that could compete in the environment.”

GE wasn’t surprised by the steep price declines that have roiled other solar manufacturers, Merfeld said. The company anticipated the declines.

“We would not be doing this if we didn’t think we could compete,” she said.

The new manufacturing facility will be built at an existing warehouse in Aurora, Colo., close to Denver and the National Renewable Energy Laboratory (NREL) in Golden.

The company plans to get operations up quickly with panels coming off production lines in 2012. It will start producing commercially available modules at the plant in 2013.

“This is great news for Colorado and further proof that our state is emerging as a center of innovation,” Colorado Gov. John Hickenlooper (D) said in press release. “GE’s move to Aurora takes advantage of Colorado’s clean energy resources and a collaborative business environment that is committed to helping the company succeed.”

“I think it demonstrates that Colorado has become a national leader in solar innovation and job creation,” said COSIEA Executive Director Neil Lurie. “GE wouldn't have selected Colorado if we didn't have the talented work force and competitive advantages that we do. Clearly GE saw significant advantages to the Colorado marketplace.”

Even before the news of the additional jobs coming to the state, Colorado already had a respectable amount of the nation’s renewable energy workforce.

“At last count, Colorado is now number two in the nation in terms of solar jobs on a per-capita basis. Clearly the policy framework that has been developed in Colorado has proven to be a significant economic driver,” Lurie said. “I think Gov. Hickenlooper and his energy and economic development teams really deserve the credit.”

The company had looked at locating the facility in multiple states besides Colorado, among them Arizona and New York. In announcing the location of the new manufacturing facility, GE also announced that it would hire more people at its Renewable Energy Global Headquarters in Schenectady, N.Y.

“We’re creating jobs, a hundred jobs across the New York site,” Merfeld said. Those jobs include research and development jobs to support advances in solar technologies.

Those technological advancements will directly feed into the new manufacturing plant in Colorado.

“We are definitely hard at work trying to move efficiency every day. We’ve been making a lot of improvements. We have a goal to start up at about 14 percent efficiency,” Merfeld said.

When the modules are ready for commercial availability, GE’s first focus will be on utility-scale projects.

“We’re going to focus on utility-scale projects,” Merfeld said. “But we’re not ruling out the commercial and residential rooftops ultimately.”

In some ways it’s no surprise that GE selected Colorado. After all, PrimeStar, the PV manufacturer that GE purchased earlier this year, which is the basis of technology for the new plant, was a Colorado-based company.

And having NREL as a neighbor, as well as Abound Solar, Abengoa Solar and SkyFuel, can’t hurt.

Pictured: GE’s mockup of the new plant in Aurora, Colo.

Utility-scale solar power generation is now substantially more efficient in terms of the amount of land it uses for electricity generation than a decade ago. END_OF_DOCUMENT_TOKEN_TO_BE_REPLACED

END_OF_DOCUMENT_TOKEN_TO_BE_REPLACED

END_OF_DOCUMENT_TOKEN_TO_BE_REPLACED
Calculate How Much You Can Save By Going Solar!
Use The Web's Best Solar Calculator!