Financing the 99% of solar projects—without 1603 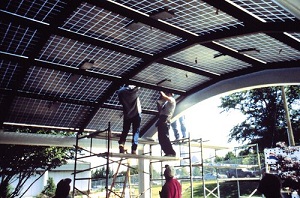 An important tool that’s helped spread the adoption of solar over the past two years, the 1603 Treasury Grant program, is set to expire at the end of 2011. It was meant to bridge a gap in tax equity financing, allowing solar projects easier access to upfront capital while the tax-equity market recovered from the recession, which it hasn’t really done yet.

A panel of experts discussed the issues and what’s at stake during a recent Sustainable Industries webinar, “A Question of Scale: Financing Solar’s 99%”.

Large-scale solar projects, like the 500-megawatt Topaz Solar Farm in California, recently bought by MidAmerican Energy Holdings, can access tax-equity financing. But small- and mid-scale projects that are a few megawatts in size or less, which comprise the 99 percent in this case, don’t have the same access to such financing, panelists said.

The 1603 grant, an upfront cash-grant in lieu of the 30 percent investment tax credit (ITC), which is paid out over a number of years, is expiring, said Greg Saunders of Tioga Energy.

“Which is more difficult for many people to use because they don't have a sizable enough tax appetite to absorb that benefit,” said Saunders about the 1603 expiration. “So there's been challenges that require folks find tax equity investors who can take the ITC.”

To finance a solar project, developers have to create a capital stack, getting all the financial parts in place, including solar incentives, tax credits, and a power-purchase agreement. Larger projects are more sophisticated and have more players and higher-quality credit participants, said Adam Boucher, CEO of Adam Capital, which specializes in projects generally less than 300 kilowatts in size.

“Within our target market, the projects we're going to see, they will have a couple elements of the capital stack,” Boucher said.

Those include incentives, federal and local and the Investment Tax Credit (ITC) or the 1603 cash grant.

“We will stack those two and lend a portion of that in the front of an upfront construction loan to our borrowers,” said Boucher. “The missing piece for them is access to those funds upfront so they can actually complete construction of their project and therefore qualify for the federal ITC grant and the local state incentives.”

When banks are looking to invest in such projects, they look at two main risks, payment and performance, said Matt Scullin, Vice President at New Resource Bank, a bank with $160 million in assets that’s investing in solar projects slightly over 1 megawatt or less.

When investing, the bank is looking for ways to mitigate both.

The first is based on access to the developer, the second can be mitigated by some newer insurance policies that payout for underperformance.

“I hope to see the insurance industry get more active especially as they relate to small commercial [projects],” said Scullin.

To help otherwise mitigate the risks involved, investors are looking for companies that have a number of projects in their pipeline and in multiple markets.

But investors and other players in the market also need to have a stomach for uncertainty and for not knowing what's around the next bend, according to Boucher.

Utility-scale solar power generation is now substantially more efficient in terms of the amount of land it uses for electricity generation than a decade ago. END_OF_DOCUMENT_TOKEN_TO_BE_REPLACED

END_OF_DOCUMENT_TOKEN_TO_BE_REPLACED

END_OF_DOCUMENT_TOKEN_TO_BE_REPLACED
Calculate How Much You Can Save By Going Solar!
Use The Web's Best Solar Calculator!