Energy Storage Could 'Change the World' 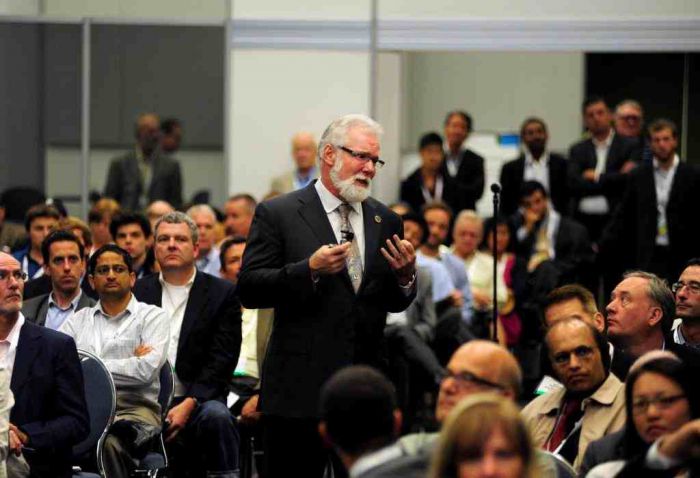 Energy storage has evolved.  It isn’t just about backing up the grid or storing traditional power supplies for outages anymore. Instead, it’s about revolutionizing the way electricity is generated and deployed.  As such, storage is inextricably linked nowadays with the growing solar, wind and other renewable energy industries.

This new picture of the energy storage industry has come into sharp focus this week at the first Energy Storage North America Conference, which is taking place in San Jose, Califorinia.

While he has no specific relationship with the energy storage industry, Lancaster Mayor Rex Parris was the keynote speaker, kicking off the three-day event. Parris is the mayor of a conservative California town known for its military presence and its desire to become the first fully solar city in California. At Parris’ urging, the city became the first municipality in the country to require all new construction to include solar photovoltaic panels, a measure city council passed earlier this year.

While Lancaster’s decision to go solar and focus on renewable energy hasn’t included a lot of discussion about energy storage, Parris said the two are tied together and could completely change he way the country gets, uses and thinks about energy.

“We have a world energy crisis which is going to hit us like a giant meteor, and traditional energy delivery won’t stop it,” Parris said in his keynote address. "Thankully, we do have an opportunity to literally change the world by shifting the current energy paradigm.”

While growing investment in solar, other renewable energy generation and storage might seem like a big state, national or global issue, Parris said that’s not where the real change will happen.

“Local government is called upon to exercise bold leadership which empowers citizens to achieve global vitality and sustainability,” he stated.

This means cities like his will be the real leaders of an energy revolution.

The conference is the first of its kind in the United States and has brought 500 professionals together from a wide range of company sectors and industries for collaborative problem solving and networking opportunities.

The conference, unlike many industry events, did not focus exclusively on energy storage professionals, however. Representatives from solar, wind, geothermal and other renewable energy verticals are also in attendance, along with experts in interconnection, smart grids, inverter technology, investment and finance.

The conference highlights recent issues utility companies have raised with net metering – laws that require utilities to credit distributed solar owners for the power they produce at the retail rate rather than wholesale power rate – responding to what they now realize is a threat to their business models. Once combined with storage, renewable energy could replace traditional utility power.

“We’re doing the things we do because we must,” Parris concluded. “We must take the power out of the hands of those in denial and put the power in the hands of the people – green power. Bold leadership at the local level is what will change communities – which will, in turn, change the world. We must test the establishment, think beyond the grid and truly believe we are changing the world.”

END_OF_DOCUMENT_TOKEN_TO_BE_REPLACED

With the launch of SolarAPP+, it is expected that solar energy suppliers will be more amenable to providing services in remote areas, as it will make it easier to conduct code inspections and ensure compliance to get their requests approved faster. END_OF_DOCUMENT_TOKEN_TO_BE_REPLACED
Calculate How Much You Can Save By Going Solar!
Use The Web's Best Solar Calculator!