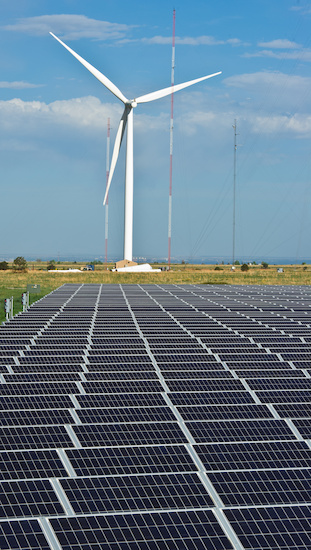 The Production Tax Credit (PTC) was one of the tax credits that’s stimulated explosive growth in the renewable energy sector over the past few years, and it’s a credit that was slated to end in 2012. But now, as part of the fiscal cliff deal that’s now passed both the Senate and House, the PTC is being extended for a year, which will help more renewable energy projects, in this case, chiefly wind projects, be deployed.

While solar projects rely on the investment tax credit (ITC) to help reduce the cost of financing, with a 33 percent credit, the PTC gives a tax credit of 2.2 cents per kilowatt hour generated by utility-scale wind, biomass, geothermal, hydroelectric, other forms of renewable energy projects for ten years of the unit’s electric production. As such it helps reduce the cost of deploying the technologies and makes it more attractive for investors and has helped create 10s of thousands of jobs.

With doubts that the credit would be extended for 2013 the wind industry in the U.S. had already started to shutter manufacturing and developers and utilities stopped pursuing wind projects. The wind industry cheered the extension, according to the American Wind Energy Association (AWEA). “The extension of the wind energy Production Tax Credit, and Investment Tax Credits for community and offshore projects, will allow continued growth of the energy source that installed the most new electrical generating capacity in America last year, with factories or wind farms in all 50 states,” it said in a release.

"On behalf of all the people working in wind energy manufacturing facilities, their families, and all the communities that benefit, we thank President Obama and all the Members of the House and Senate who had the foresight to extend this successful policy, so wind projects can continue to be developed in 2013 and 2014," said Denise Bode, now former CEO of AWEA.

The deployment of wind, and other forms of solar has been on the rise. Wind consisted of more than 8 gigawatts or 44 percent of all power installed in the U.S. in 2012—outpacing all other forms of newly installed energy in the U.S. last year. But without an extension, a Navigant Consulting report determined that wind installations could fall to 2 gigawatts in 2013. That would put a significant number of the 75,000 wind industry jobs at peril. AWEA said the extension would save 37,000 jobs and will revive business at nearly 500 domestic manufacturing facilities.

Still, the legislation fell short of the 4 year extension Navigant called for in its report. And manufacturers are hoping the final language will allow a slightly longer period. “Companies that manufacture wind turbines and install them sought that definition to allow for the 18 to 24 months it takes to develop a new wind farm,” AWEA said.

Utility-scale solar power generation is now substantially more efficient in terms of the amount of land it uses for electricity generation than a decade ago. END_OF_DOCUMENT_TOKEN_TO_BE_REPLACED

END_OF_DOCUMENT_TOKEN_TO_BE_REPLACED

END_OF_DOCUMENT_TOKEN_TO_BE_REPLACED
Calculate How Much You Can Save By Going Solar!
Use The Web's Best Solar Calculator!