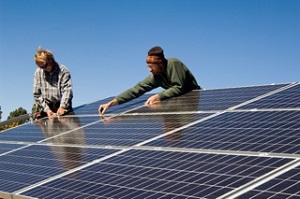 Up in the Rocky Mountains, gnomes are coming up with new ways to make solar power accessible to the public. Well, they’re not really gnomes, but the folks over at Clean Energy Collective (CEC) are building their second community solar garden at the Garfield County Airport in Colorado, allowing residents access to cheaper solar and better net-metering rates than they could get on their own.

Their first, the Mid-Valley Community Solar Array in El Jebel, Colo., was a 77-kilowatt array.

“We Have 19 customers representing the full array,” said David Wiedinmyer, director of business development at CEC. “It’s a little bit smaller than we’ll end up building in future projects.”

The company recently broke ground on its second project, a 1.2 megawatt photovoltaic facility, at the Garfield County Airport. At this point, CEC is taking reservations for system ownership.

“In March or April, we will activate their ownership credits,” Wiedinmyer said.

The for-profit company has created a model for developing and selling a solar installation, panel by panel, to community members.

“The model we’re using is strictly related to solar,” he said. “We could use other clean energy sources with the same ownership structure.” Community members buying into a CEC solar garden can buy into the array by purchasing a panel for $725.

In return for buying a part of the array, the customer’s electric bill—in this case with Holy Cross Energy, a co-op—is credited for the power produced by their portion of the array. In some instances, it could be more than their monthly use, leading to a payment for net excess generation.

Clean Energy Collective arranged a power-purchase agreement with Holy Cross, under which array owners are credited at a higher rate than they would get for excess energy from owning their own solar system, Wiedinmyer said.

The price customer-owners are paid increases as Holy Cross’ generation price increases. However, as part of the agreement, any renewable energy credits accrued by the system are sold back to Holy Cross Energy as part of the cost of developing the array, Wiedinmyer said.

The initial price per watt to customers was about $6 per watt, according to The Aspen Times. Given the various incentives, including solar rebates, offered through the government, the state, counties and Holy Cross Energy, the price per watt was lowered significantly. The Aspen Times said most customers-owners in Eagle County, chose to purchase about 2 kilowatts of the array for $3,500, or $1.75 per watt.

These 10 cities have been claimed by the researchers to have the largest solar investments in the US. END_OF_DOCUMENT_TOKEN_TO_BE_REPLACED

After decades of research, the solar industry has finally started to develope the underlying technology behind “transparent” solar panels. END_OF_DOCUMENT_TOKEN_TO_BE_REPLACED
Calculate How Much You Can Save By Going Solar!
Use The Web's Best Solar Calculator!