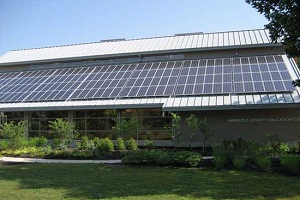 The groundwork for a major solar photovoltaic installation at the greenest zoo in the country was laid one tiny step at a time.

It all started at a green building convention in Arizona about a year and a half ago, said Mark Fisher, the senior director of facilities, planning and sustainability at the Cincinnati Zoo in Ohio.

Representatives from Melink Corporation planted the seed, and he was thinking maybe the zoo could get a major solar installation.

“Mostly though, I thought, ‘this is so cool, but there’s no way it’s ever going to happen,’” Fisher said.

Over time, his certainty that the zoo would go solar rose from zero percent to 5 percent, then 10, and eventually it looked like it could actually happen, he said. Melink worked with the zoo to locate funding and do feasibility studies. When the project got two new market tax credits at the end of 2010, Fisher’s confidence in the project shot up to 100 percent.

Now about half of the solar photovoltaic panels going into the parking lot are fully installed.

“We’re hoping to flip the switch in April,” he said.

“The moms are going to love that,” he said. “It gets pretty hot here in the summer.”

The project will cover about 4 acres and produce about 1.56 megawatts of energy. There will be times on sunny days when the panels will be producing more power than the zoo uses.

“We’ll be completely off the grid,” Fisher said.

But averaged out over days, nights, summers and winters, the panels will cover about 20 percent of the zoo’s overall need.

The arrangement the zoo has with Melink allows it to buy power at a fair rate for the first seven years while Melink owns and maintains the system. In the eighth year, the zoo will have an option to buy the system outright or sign another contract with Melink, Fisher said.

The zoo’s system is uniquely visible in an urban setting and there are tremendous educational opportunities, Fisher said. There will be kiosks at the zoo entrance where kids and families can see how the solar project works and how much energy it’s producing.

“Then, there will be more detailed data online for nerds like me to comb through,” Fisher said. “It’s totally freaking awesome, and we’re really excited about it.”

Pictured: A previous solar addition to the Cincinnati Zoo, this one on the Harold C. Schott Educational Center, installed by Dovetail Solar. Image courtesy of Dovetail Solar.

In 2020, wind power generated over 300 terawatt-hours, or 7.29 percent of the total electrical energy in the country, surpassing hydroelectric power as the biggest source of renewable energy in the US. END_OF_DOCUMENT_TOKEN_TO_BE_REPLACED

END_OF_DOCUMENT_TOKEN_TO_BE_REPLACED

Now is indeed the best time to invest in solar panels, especially if you want to double your ROI during the course of its lifespan. END_OF_DOCUMENT_TOKEN_TO_BE_REPLACED
Calculate How Much You Can Save By Going Solar!
Use The Web's Best Solar Calculator!