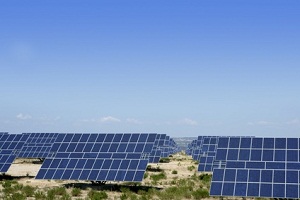 It was just a few weeks ago that the BLM finalized the PEIS creating solar energy zones throughout seven southwestern states, and already the BLM is expanding the solar energy zones. Earlier this week BLM proposed creating an additional Solar Energy Zone in Arizona, which would open up more federal lands to solar development.

The solar energy zones were developed as part of the Obama Administration’s goal of developing more renewable energy throughout the U.S. and were created under the BLM’s programmatic environmental impact statement (PEIS). Basically the BLM did most of the preliminary work to determine that the 17 designated areas were ideally suited for solar. It will drastically speed up the process of planning and developing solar on the lands.

The PEIS identified hundreds of thousands of acres in the southwest for potential solar developments. During the PEIS development phase the BLM seek out comments from the public, which resulted in a Solar Energy Zones that even drew praise from environmentalists, who were concerned that BLM managed lands could be misused by solar developers.

As part of the process, BLM identified two areas in Arizona ripe for solar development. At present only 6,000 acres of the total 285,000 of federally managed land identified as solar energy zones are in Arizona, the smallest amount among the states in the PEIS, which include California, Colorado, Nevada, New Mexico and Utah. Now it’s proposing a third, 2,550-acre zone for Arizona in Yuma County’s Agua Caliente area, which is no stranger to solar projects.

While Arizona’s Sierra Club has not decided whether it will support the new solar energy zone at this point, it supported the original solar energy zones established in Arizona. However, the new site has already drawn praise from from some in the region, like the Yuma Sun. The newspaper ran an editorial Oct. 29 in support of the proposed zone, calling it a win-win. “We have an abundance of undeveloped desert space, much of which is held by the government. According to the Yuma County 2020 Comprehensive Plan, only 8.88 percent of land is privately owned, while the state of Arizona owns almost 6 percent,” the newspaper stated.

It added that the project will have both short- and long-term benefits. “In the short term, solar projects have some benefit here, providing jobs during the construction phase, which is a direct boost to our economy.…In the long term, solar-generated power has benefits too, as an eco-friendly power resource not reliant on fossil fuels.”

In 2020, wind power generated over 300 terawatt-hours, or 7.29 percent of the total electrical energy in the country, surpassing hydroelectric power as the biggest source of renewable energy in the US. END_OF_DOCUMENT_TOKEN_TO_BE_REPLACED

END_OF_DOCUMENT_TOKEN_TO_BE_REPLACED

Now is indeed the best time to invest in solar panels, especially if you want to double your ROI during the course of its lifespan. END_OF_DOCUMENT_TOKEN_TO_BE_REPLACED
Calculate How Much You Can Save By Going Solar!
Use The Web's Best Solar Calculator!