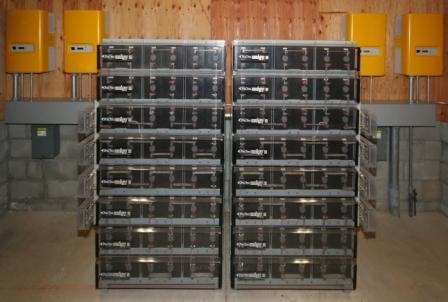 While stationary battery back-up systems for industrial users, hospitals and data centers aren’t the exciting new darlings of the emerging battery market, they will provide a steady and reliable source of growth and revenue for battery manufacturers that are eager to grow.

While battery technology is growing by leaps and bounds to meet new market demand for solar-tied grid storage and electric vehicles, there are certain market sectors that have always relied on batteries.

Uninterruptable power supply is essential for certain industrial operations, at hospitals and in the growing data storage industry, where power outages are intolerable.

The market for lithium-ion battery backup and UPS systems is expected to grow six fold between now and the end of the decade, according to a recent report from market analysis firm Lux Research.

“The interesting thing is that the demand for these types of systems is actually shrinking slightly in the developed world as data center customers and others are constantly trying to reduce their total power demand,” said Steve Minnihan, author of the report. “But in the developing world, the demand is growing very rapidly.”

He said the developing countries are using UPS and battery backups in the same industry sectors where they’re applied in the U.S. Places like India, Southeast Asia and Africa, however, are building infrastructure at unprecedented rates, which drives demand for battery backup systems in new hospitals, manufacturing hubs and data centers.

“I think this is so interesting because it’s a very large market,” Minnihan added. “There’s 800 gigawatts of power capacity in UPS and battery backup throughout the world. That makes this a very, very large market.”

Even as the need for battery backup diminishes in the developed world, existing operators will be switching from lead-acid batteries to Li-ion technology when they replace their aging systems.

The report projects that lithium-ion batteries will lead growth in the stationary battery backup market, climbing from $143 million to $553 million in the next six years.

That surge in demand will help to eliminate a glut of lithium-ion battery supply and restore supply and demand balance to the battery market by 2017. This is impressive because the battery industry hasn’t seen the same degree of oversupply and market tumult that most new markets, such as the solar industry, typically experience, Minnihan stated.

While there have been some bankruptcies and acquisitions, they were nowhere near what the solar and other new markets before have gone through.

Of course, once the market balances, big players that have been sitting on the sidelines, like Panasonic and Sony, are likely to ramp up production rapidly, which will likely spin the market into another cycle of oversupply.

Nano diamond batteries have the impressive ability to retain its charge, not just for a year or two, but for thousands of years! END_OF_DOCUMENT_TOKEN_TO_BE_REPLACED

In 2020, wind power generated over 300 terawatt-hours, or 7.29 percent of the total electrical energy in the country, surpassing hydroelectric power as the biggest source of renewable energy in the US. END_OF_DOCUMENT_TOKEN_TO_BE_REPLACED
Calculate How Much You Can Save By Going Solar!
Use The Web's Best Solar Calculator!