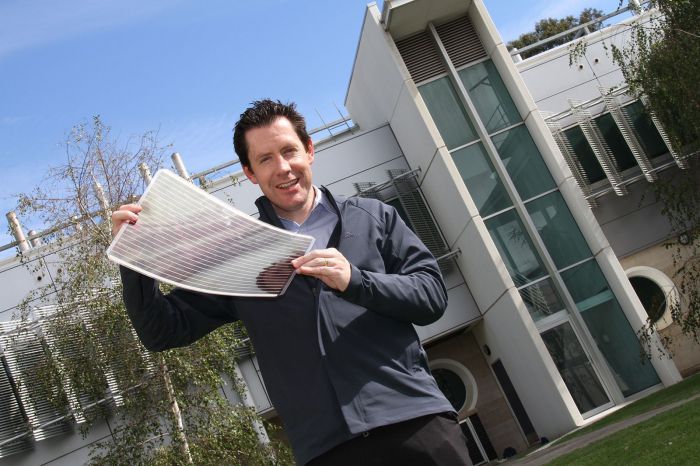 The new printer installed at Australia’s science agency, the Commonwealth Scientific and Industrial Research Organisation (CSIRO) is making solar modules as fast as the news can print it. But this isn’t a conventional inkjet by any means.

While scientists and researchers have talked about printing PV cells and modules, this is one of the largest PV printing facilities that’s been developed to date. By printing PV devices with a printer and at room temperatures in normal atmospheric conditions, the devices are much less expensive than silicon or other types of PV which require expensive equipment that’s also expensive to run, like vacuum chambers and high-temperature ovens. In addition, the printer uses existing printing technologies which makes it much less expensive. In fact, CSIRO said it is worth A$200,000 (about $194,760 in U.S. dollars). Other companies, like Nanosolar are also working on printing PV modules, but thus far there aren't many commercial deployments of the technology.

Scientists at the Victorian Organic Solar Cell Consortium (VICOSC)—which consists of CSIRO, The University of Melbourne, Monash University, BlueScope Steel, Robert Bosch SEA, Innovia Films and Innovia Security and supported by the Victorian State Government and the Australian Government—will use the printer to literally print Organic PV modules at a rate of up to 10 meters a minute, and a cell every 2 seconds. The cells from the printer are as large as 11.7” by 16.5”; the modules can be much larger. “In just three years they have gone from making cells the size of a fingernail to cells 10 cm square. Now with the new printer they have jumped to cells that are 30 cm wide,” CSIRO said.

"There are so many things we can do with cells this size," said CSIRO materials scientist, Scott Watkins. "We can set them into advertising signage, powering lights and other interactive elements. We can even embed them into laptop cases to provide backup power for the machine inside."

The printer can also apply the PV materials to a variety of flexible surfaces, from plastics to metals. "Eventually we see these being laminated to windows that line skyscrapers. By printing directly to materials like steel, we'll also be able to embed cells onto roofing materials," David Jones, VICOSC project coordinator.

Still, the solar modules the printer produces aren’t nearly as efficient as silicon or even thin-film modules, which means you need a lot more of them—and space—to produce the amount of electricity a silicon PV module produces. But, since the device essentially uses semiconducting inks, the ink formulas can be tweaked and reformulated as they become more efficient.

There’s also another PV printer on the way, according to CSIRO. “As part of the consortium, a complementary screen printing line is also being installed at nearby Monash University,” the organization said.

The World Bank says that the solar floater market when coastal waters are added to it the potential for solar production becomes enormous. END_OF_DOCUMENT_TOKEN_TO_BE_REPLACED

END_OF_DOCUMENT_TOKEN_TO_BE_REPLACED

END_OF_DOCUMENT_TOKEN_TO_BE_REPLACED
Calculate How Much You Can Save By Going Solar!
Use The Web's Best Solar Calculator!