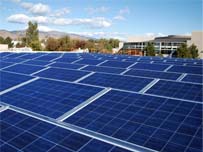 $300 million isn’t a small number. But that’s how much is now available for residential solar leases through a tax-equity fund created by Clean Power Finance through a partnership with MS Solar Solutions Corp. owned by Morgan Stanley, Main Street Power Co. and Zions Bancorporation and other investors. It’s the largest fund to support residential solar leases to date.

It’s also the second such fund announced in the past two weeks, showing the growing popularity of such options for both investors and homeowners. Last week U.S. Bancorp and SunRun created a $150 million tax-equity fund to support Sunrun’s third-party ownership (TPO) options.

Under this partnership Clean Power Finance will offer its MySolar lease through partnered installers and Main Street Power is the long term owner of the solar asset in specific states starting in Arizona and California. It’s the third solar finance facility that Clean Power Finance has introduced, bringing its total fund up to roughly $500 million.

It’s the first time Clean Power Finance will offer its lease in Arizona, according to Kristian Hanelt senior vice president of renewable capital markets for Clean Power Finance. “We intend to add on additional states throughout the rest of the year.”

The deal was built around Morgan Stanley’s pre-existing partnership with Main Street Power, which had resulted in previous commercial projects. While the partnership was one of the most complex, it was rather fortuitous, Hanelt said. “Morgan Stanley made decision to get into the residential solar market,” he said. Meanwhile Zions wanted to increase its presence in the residential solar market. “Through fortuitous encounters it came together relatively easily it took some time to get the complexities straightened out.”

Under the partnership, Zions Energy Link was the leader of a group of debt providers that supported the fund. The funds are similar to those that have supported residential leases and power purchase agreements from other companies like SolarCity, Sungevity and SunRun, but are different in some key ways, according to Hanelt. “The key difference is we don’t put our balance sheet, our cash into residential solar systems. Those companies are putting their own money to work,” he said. “What we’re trying to do is serve as and create a conduit between funds and installers to help grow installation businesses.”

Other third-party ownership companies offer residential and commercial installations. But Clean Power Finance is focussed on residential. “The residential side is experiencing phenomenal growth right now and we think that will continue for quite some time,” Hanelt said.

Based on the demand for Clean Power Finance’s third-party ownership model, the company plans to work on developing more funds this year. Hanelt said the company already is seeing more than $2 million of applications on good days.

As of January 1st, 2020 home owners could claim 30% of the installation cost as deductions while filing their taxes, this has changed significantly this year. END_OF_DOCUMENT_TOKEN_TO_BE_REPLACED

Approval is expected soon on Gemini, a huge 7,000+ acre solar farm served by Warren Buffet’s NV Energy, thus making it the largest solar farm in all of America. END_OF_DOCUMENT_TOKEN_TO_BE_REPLACED

END_OF_DOCUMENT_TOKEN_TO_BE_REPLACED
Calculate How Much You Can Save By Going Solar!
Use The Web's Best Solar Calculator!