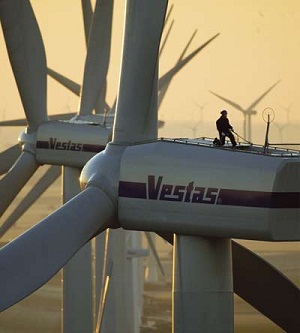 Here in Colorado, we have a peculiar gubernatorial race.

Dan Maes, the state’s Republican candidate, is polling so low that fellow Republican, Tom Tancredo, left the party and to run under the Constitution Party ticket.

Our current governor, Bill Ritter (D), has made clean energy his battle cry, and has pumped a lot of funds into the state’s renewable-energy infrastructure.

However, even more peculiar is that both the low-polling Maes and the vitriolic Tancredo don’t think there are jobs in green energy. They both want to abandon Gov. Ritter’s push for renewables and, instead, invest in fossil-fuel production, mining operations, etc.

In fact, Tancredo has been quoted saying that the green-energy economy is basically a myth.

Well, two weeks ago, the Vestas Wind Turbine plant officially opened in our backyard. The Pueblo, Colo., plant released figures today that it has employed over 400 workers—only a handful of those workers (less than 10) come from outside the state. If Helios secures the Diven cannery in Fowler, Colo. (only about 20 miles away), that could be twice the amount of workers in the area employed by clean energy manufacturing facilities.

You would hope that, as Colorado Governor, either Maes or Tancredo could look within their own state to see tangible proof of the “Mythical” green-energy economy.

Now, last I checked, Colorado’s unemployment rate is 8.2 percent. Let’s plug that into Pueblo’s population, which hovers around 100,000. That means that, ostensibly, 8,200 people are unemployed in Pueblo. That means that the Vestas plant employed 20.5 percent of the unemployed workforce in Pueblo (these are all estimates, but they give you an idea of how important this one manufacturing plant was to the region).

Cutting the unemployed by 20 percent is huge, and the Vestas plant is only the beginning.

Maes and Tancredo seem to be interested only in the short-term solution. Start mining tomorrow, and we can put hundreds back to work. But what happens when the mountain stops yielding uranium, or coal? What do you think the mining company does then? It moves, taking with it those jobs to another state or country. I'm also completely omitting all the harmful environmental impacts from mining in this argument as a favor to Maes and Tancredo. You're welcome, guys. And, even ignoring the environmental impact, let’s be honest, all those resources are going to dry up. It’s not a matter of if, but when.

However, we’ll always have wind and the sun to power our cities and vehicles. And the day the wind stops blowing or the sun stops shining, powering the TV to watch Saw X will be the last concern of John Q. Taxpayer.

Utility-scale solar power generation is now substantially more efficient in terms of the amount of land it uses for electricity generation than a decade ago. END_OF_DOCUMENT_TOKEN_TO_BE_REPLACED

END_OF_DOCUMENT_TOKEN_TO_BE_REPLACED

END_OF_DOCUMENT_TOKEN_TO_BE_REPLACED
Calculate How Much You Can Save By Going Solar!
Use The Web's Best Solar Calculator!